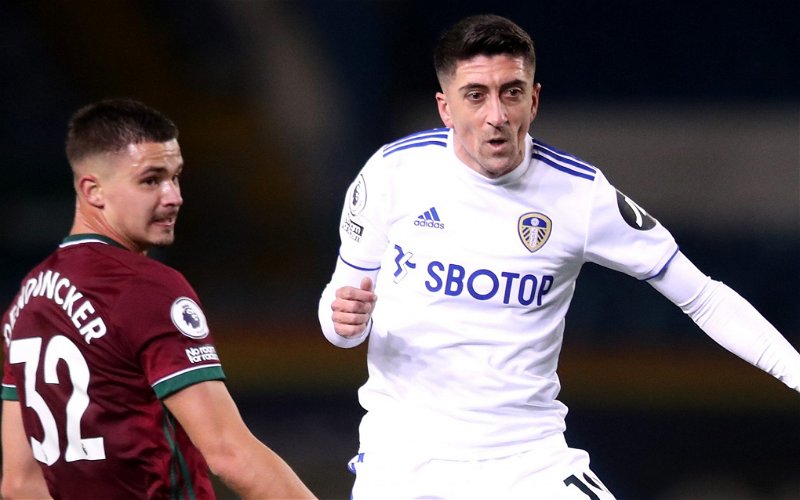 There is unlikely to be any lingering tension between Pablo Hernandez and Marcelo Bielsa following the recent controversy between the Leeds United duo.

That’s according to the Yorkshire Evening Post’s Leeds United reporter Graham Smyth, who has been discussing the situation surrounding the Spaniard on the Inside Elland Road podcast.

Having played a key role in Leeds’ promotion to the Premier League last season, Hernandez has found game time harder to come by during the current campaign.

The Spaniard has featured in just four of the Whites’ nine league games since the start of the season, and things came to something of a head with Hernandez’ petulant reaction to being substituted by Bielsa during Leeds’ recent defeat to Leicester.

Since then. Hernandez has been absent from the matchday squad for his side’s defeat at Crystal Palace, and draw with Arsenal last time out.

But despite that, Smyth does not believe there is any long term issue between the player and his manager.

Speaking about the situation surrounding the pair on the Inside Elland Road podcast, Smyth said: “I would be really surprised if there’s any hangover from the bust-up.

This will be a big relief for those associated with Leeds United.

Although things haven’t quite happened as he would have hoped so far this season, Hernandez is still a quality player, and will no doubt be determined to prove a point when he is given the opportunity.

As a result, you feel the Spaniard will still have a big contribution to make before the season is out, and Leeds fans will no doubt be relishing such a moment.

Indeed, given the connection with the club he has established with Leeds during his time at the club, it would be sad if his Leeds career was to end on a sour note such this, so the fact that incident is seemingly behind those involved ought to be a good thing.

It is of course, also worth noting that incident such as this do happen regularly in football, so it may be strange if this alone was to spell the end of Hernandez’s prospects at Leeds, given what he has previously done for the club.