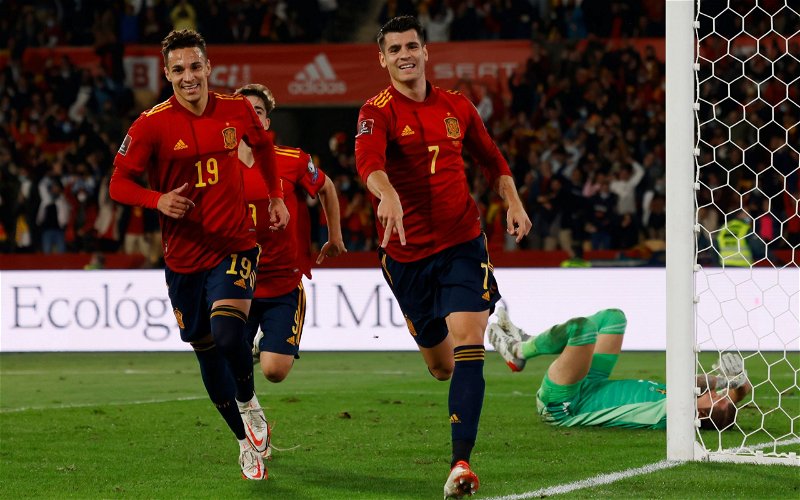 Rodrigo’s form at Leeds United earned him a recall into the Spain set-up this month.

Leeds have seen a significant improvement in their club-record signing in the opening 11 fixtures of 2021/22, with Luis Enrique rewarding him with a November call-up for Spain’s fixtures against Greece and Sweden.

Two narrow wins for Spain has seen them qualify for the 2022 World Cup in Qatar, leaving Rodrigo with the opportunity to head off to a major tournament in 12 months after the disappointment of missing out on Euro 2020.

Our graphic above shows how Rodrigo performed over the two games, having stepped off the bench in both to play 74 minutes combined.

The 30-year-old failed to score or assist in either game, managing three shots on goal against Greece.

Rodrigo had only four touches in the penalty area, whilst his three attempted crosses failed to find a teammate.

As Spain hauled themselves to Qatar, Rodrigo accrued a pass success rate of 66.6%; substance over style for the 2010 World Champions.

Out of possession, Rodrigo is always fairly steady at Leeds, working hard to press. He made one interception and recovered the ball on two occasions on his Spain return.

It wasn’t vintage from the Leeds man. Judging by Rodrigo’s social media activity and pictures of him celebrating in the changing rooms, he isn’t bothered about that. There’s a World Cup on the horizon now for him and his compatriots.

Job done, then, but it’s a waiting game to see whether Enrique will call on Rodrigo again in Qatar.

His Leeds form will be crucial to keeping him in Enrique’s thoughts. A bigger impact if he gets the opportunity to pull on the Spain shirt again will be what gets him on the plane.

The improvement Leeds have seen back at Elland Road promised much more.