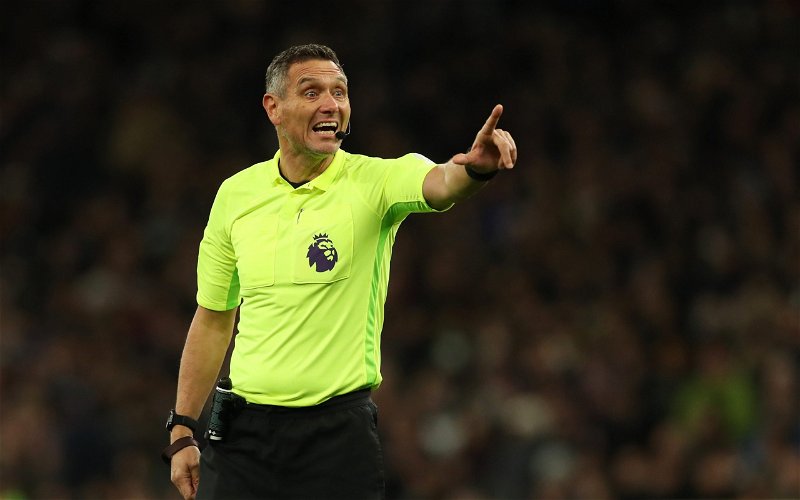 The Whites haven’t been the most fortunate when it has come to refereeing decisions this season, with red cards and non-penalty decisions galore.

A defeat to Tottenham at the weekend was perhaps underserved on the balance of play and could have been different if Andre Marriner was in a harsher mood.

As Leeds chased an equaliser in the second half, Joe Gelhardt was the focal point of Leeds’ attack and came close to restoring parity between the sides.

As the ball dropped to him in the box, he looked to turn and shoot, only for his likely goal-bound effort to strike the arm of Harry Kane who was little over a yard or two away.

Marriner waved away appeals before a brief VAR check confirmed that no penalty was to be awarded, much to the dismay of the appealing Leeds players crowding him.

“It’s very close. He doesn’t see it coming. It’s come at speed. But without a doubt, his arms are by his side. He can’t cut his arm off. It’s there. It is the most natural position to be.

“In the Champions League, anything that strikes the arm is given. You look at that, where would you want him to put his arm? It’s in the most natural position.

“I think that’s the correct call. You don’t want to give penalties that people aren’t happy with.”

At first, it seemed obvious that it should have been a penalty, given the fact that he has blocked a goal-bound shot with his arm.

I can see the justification for no penalty being given on the basis that he can’t do anything else than have his arms there, but he’s denied a probable goal with his hand.

The ruling is so murky with handballs and we’re crying out for some clarity because that struck his arm and as Gallagher says, would have been given in the Champions League.

If there’s good justification out there, we ought to hear it because referees get away with controversy every week and have no accountability.