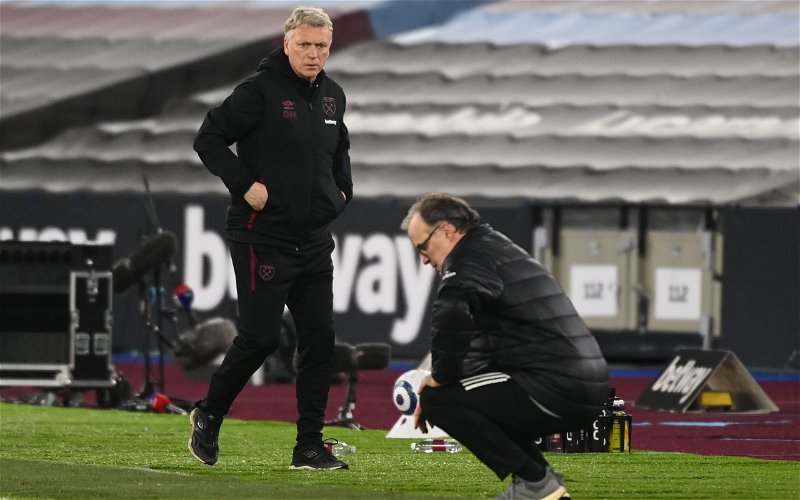 Leeds United have plenty of injuries to contend with as West Ham make the trip to Elland Road, including Patrick Bamford.

As Leeds head into this weekend, they will be buoyed by their penalty shootout triumph over Fulham, as they go looking for their first Premier League win this season.

We’re not quite at panic stations yet but Marcelo Bielsa will know that the current injury problems are taking their toll on the fans’ confidence.

Up next is a home fixture against David Moyes’ West Ham side, who are also fresh from advancing in the League Cup, after seeing off Manchester United on Wednesday.

It has been confirmed that Patrick Bamford will be out for Leeds in this matchup, as he picked up a minor ankle injury in the draw against Newcastle.

The Hammers have contended with a striker absentee too lately as Michail Antonio sat out with suspension, but he’s back in the fold this week.

In the meantime, Moyes called upon winger Jarrod Bowen to deputise in attack, to decent effect, and it’s something that Leeds could look to potentially emulate.

That’s the view of former Premier League manager Alex McLeish, who believes that Bielsa has little in terms of a direct replacement for Bamford.

Speaking to Football Insider, he stated:

“They don’t. The bottom line is Leeds just don’t [have a replacement].

“Bielsa’s perhaps looking for a chink of improvisation. Possibly play someone else in that position as David Moyes has done successfully with Bowen.

He’s played as a centre-forward for West Ham. It could be one of those inspired moments from the point of view that we don’t have anything else.

“They seriously may have to look at playing one of their technical players through the middle.”

I’m not sure if McLeish has take a look at our squad recently, but we do have a club-record Spanish international striker in our squad.

Rodrigo might have been played in midfield more than up front, but it’s obvious we do have someone to step in.

That being said, this improvisation he alludes to is something we’ve seen from Bielsa, with Jack Harrison playing up top a handful of times later on in games.

I would be very shocked if we didn’t play Rodrigo or Tyler Roberts in attack, our two options that are more natural strikers.