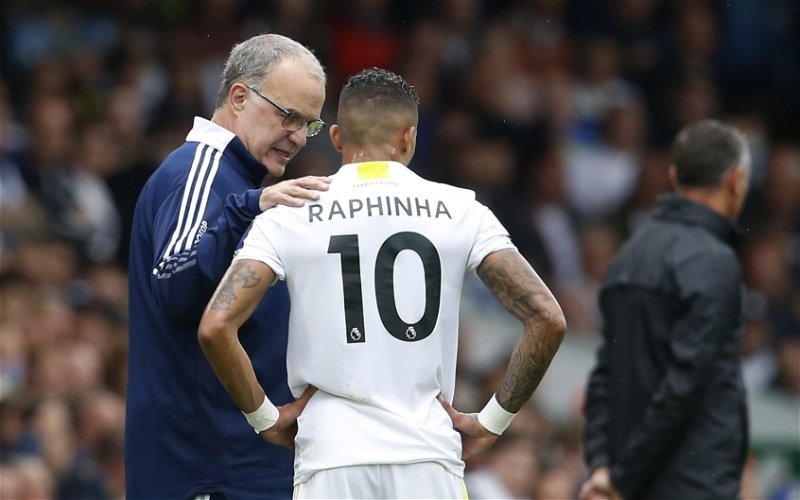 Raphinha has travelled with the Leeds United squad overnight despite major doubt surrounding his involvement against West Ham United this afternoon.

Leeds have a host of injury worries at the moment, Raphinha included, after the winger hobbled out of last Friday’s 1-1 draw at Newcastle United.

Marcelo Bielsa opted to not include the Brazilian in his midweek squad in the League Cup, thrusting Raphinha’s involvement this coming weekend into major doubt.

A major boost, though, has emerged overnight for Leeds.

Supporter footage from @rugbyleaguelady on Twitter has shown Raphinha stepping off the Leeds coach at the Hilton hotel last night alongside Rodrigo Moreno.

Leeds, of course, stay at that particular hotel pre-match and usually only have the players involved in the squad with them.

Raphinha, 24, has scored two goals in his five appearances this season for Leeds.

It’s doom and gloom when it comes to Leeds’ injuries at the moment.

Raphinha’s seemingly potential involvement doesn’t quite solve all our issues (the defence is a real worry), but it does give us a bit more going forwards.

He’s absolutely essential to what the side do and his first-half performance in Newcastle last weekend was the Brazilian at his very best.

Bielsa will hope he can get at least another hour out of him today. If he can, Leeds might well be in with a shout of picking something up. That seemed unlikely when team news dropped a couple of days ago.