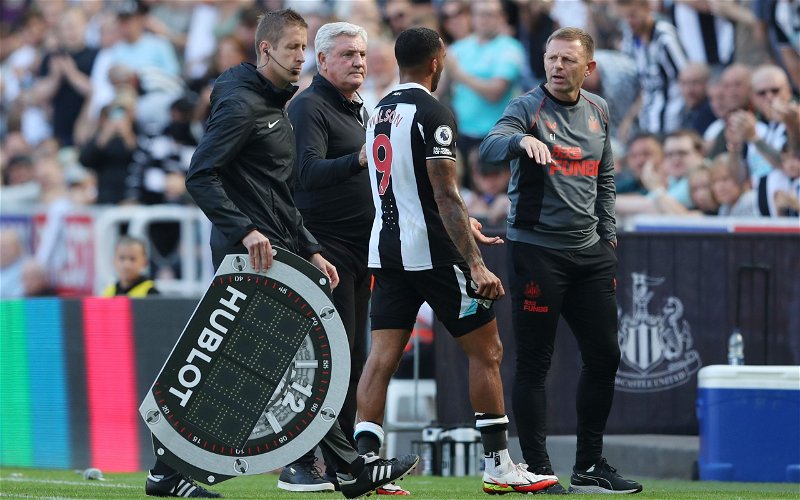 Newcastle United manager Steve Bruce has confirmed that he is without three first-team players for the visit of Leeds United, including Callum Wilson.

Leeds face Newcastle in the first fixture of the weekend as they look to get off the mark with their first win of the season, while the hosts are in a similar spot right now.

As both sides hope for a better performance than in previous matches, selection headaches are weighing down Steve Bruce and Marcelo Bielsa.

As Leeds look to find a way to resolve their centre-back crisis, things aren’t looking too good for the Magpies at the other end of the pitch.

After coming off against Southampton nearly a fortnight ago, striker Callum Wilson has been nursing a quad injury that kept him sidelined in their defeat to Manchester United last time out.

Meanwhile, the likes of Jonjo Shelvey, Paul Dummett and Ryan Fraser have also missed out in recent weeks as Bruce shuffles to pack to make do with his limited squad.

Ahead of the game on Friday night, Bruce has confirmed in his press conference that Wilson, Shelvey, and Dummett are all missing while Fraser is likely to be back (via Alistair Magowan):

Wilson doesn’t have a great record against Leeds anyway, he’s played against us four times and fired a blank each time.

However, it’s key for us that he’s not available because he’s their biggest goal threat and a massive part of how Bruce looks to set up.

That being said, it’s also great to see that we don’t have to come up against Jonjo Shelvey either, given his exploits against us in the past – controlling play from the base of midfield and even scoring a hattrick against us back in 2011.

We have our own issues to deal with anyway and we don’t look too strong at the back, with only one centre-back available and a potential switch of Luke Ayling to the middle on the cards.

It might not be the prettiest game of football tomorrow, but it’s starting to become a case of just getting three points on the board.