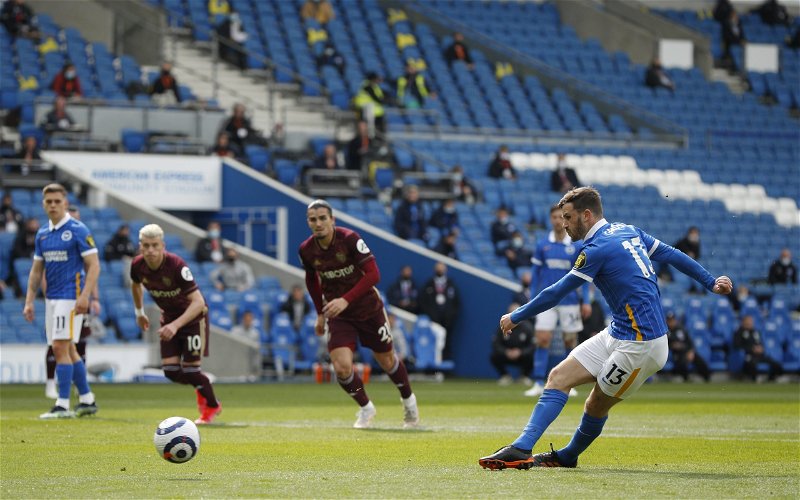 Leeds United face a trip to Brighton this weekend looking to translate good performances into wins after losing at Spurs.

The Whites are just outside the relegation zone heading into game number 13 of the season and are in need of recapturing the form that made them the team to watch last term.

On 11 points currently, Leeds have amassed five draws highlighting that the side are close to cracking their form again, but face a tricky test against the Seagulls this weekend.

After a sensational start to the season, Graham Potter’s Brighton have settled down into ninth place, six points above Leeds at present.

Journeys to the AMEX haven’t been fruitful at all for Leeds, with the visitors yet to pick up three points on the road since the stadium opened in 2011.

Brighton’s recent dip in form does provide Leeds with hope, but they will need to do with key players still absent from the lineup.

Leeds looked brilliant in the first half against Spurs last time out, before relinquishing control of the game to the hosts and letting their lead slip.

Sky Sports’ Paul Merson believes Leeds are set for more misery this weekend with a defeat to the Seagulls, as he wrote this prediction for SportsKeeda:

“Leeds United were outstanding in the first half against Spurs last week, and I thought there was no way they were going to lose that game. They were poor in the second half, however, and need to be more consistent to move up the table.

“Leeds are better than they were at the start of this Premier League season, but this is a hard game for them. Brighton have been impressive under Graham Potter and I’d back them to win this match comfortably.”

I think if we can bring the positives from our Spurs performances into this game and show more consistency, then it’s going to be a good day for us.

To think it’ll be comfortable based on our dip in the second half last week is a tad harsh when we were playing with a B-team.

We have enough to cause a lot of problems against every team in this division, so I can see it being a tight encounter.

Brighton look much better this season than last though, so as Merson says, this will be a tough game against a good side who deserve to be where they are in the table.