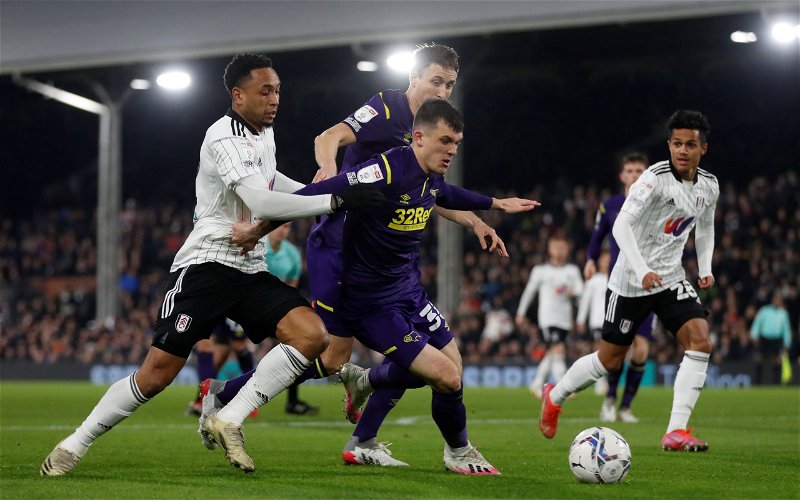 Leeds United are keeping tabs on Derby County’s current troubles ahead of a potential swoop for Jason Knight.

As Leeds sit in the Premier League, the teams they have left behind in the Championship don’t all have it great at the moment.

Derby County’s turmoil since their failed 18/19 promotion bid has gone from bad to worse and they now face a likely fire sale.

The Rams have been deducted 21 points in total this season as they sit bottom of the Championship, and in administration, knowing something has to change if they want to keep their talented crop of youngsters.

One player shining at the moment despite the off-field drama is Jason Knight.

The versatile midfielder has been in solid form of late, scoring recently in the 3-2 win over Bournemouth – and he’s attracting attention because of it.

Football League World are reporting that as a result of Derby’s woes, Leeds are one of a handful of Premier League clubs taking a look at the 20-year-old.

The Whites are joined by six other clubs including Leicester City and Newcastle United in their pursuit of the Republic of Ireland international.

Knight is one of four youngsters from Pride Park namechecked in the report as top flight clubs sniff out a bargain deal.

He’s someone I wouldn’t mind us taking a look at ahead of the January window actually.

A lot of Derby players are making a great name for themselves at the moment, playing well with all the horror going on behind the scenes.

His deal until 2023 means we’re not dealing with a player tied down for the foreseeable future at Derby, so a cheap deal could be on.

It fits the mould of the types of signings the club are eager to make at the moment too.