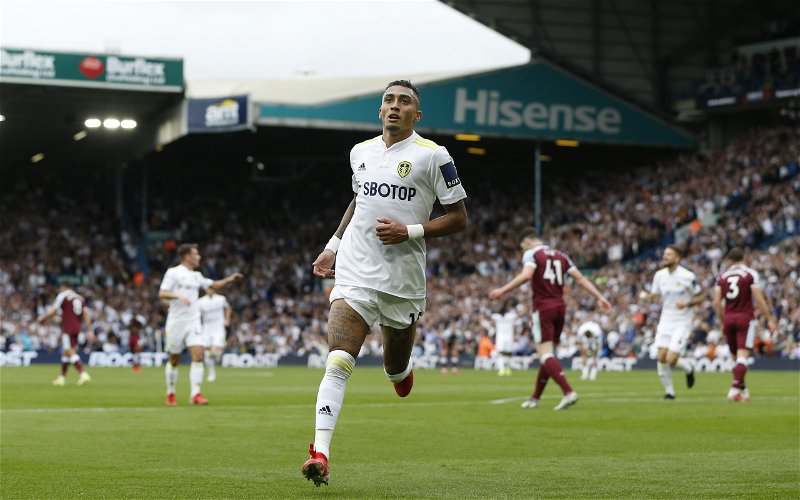 Leeds United winger Raphinha would not be a guaranteed starter for Liverpool if he was to make the move to Anfield.

That’s according to the Merseyside club’s former defender, Glen Johnson, who does admit that the Brazilian would fit in well and have a part to play if he did join Jurgen Klopp’s side.

Ever since joining Leeds on deadline day last summer, Raphinha has been outstanding for the Elland Road club.

The winger has shown he can both score and assist goals regularly in the top-flight, something which has seen him break into the Brazil team during the current international break, where he has again impressed.

That has already prompted plenty of speculation around the future of the 24-year-old, with Liverpool among the clubs who have been linked with a move for Raphinha.

Now though, it seems that Johnson does not believe that the Leeds man would start week in week out for Liverpool, but that he could still have a part to play for the club, were such a move to materialise.

Speaking about what he would expect from Raphinha if the winger did move to Anfield, the ex-England international told bettingodds.com: “I like him. I’m a big fan. The style of football that Leeds play suits him, he has the shackles off and he’s technically great.

“If he did sign for Liverpool then I wouldn’t expect him to demand a place in their starting eleven, but he would certainly be one of those players on the fringe and would definitely strengthen the squad.

“He’s the sort of player that would suit Liverpool’s style of play too, so if the money was right then I’m sure he would be high on their list of targets.”

Raphinha might not start for Liverpool regularly to begin if he was to move, but you would expect that to change further down the line.

At 24-years-old, the Leeds man is considerably younger than the Reds current front three of Mo Salah, Sadio Mane and Roberto Firmino.

As a result there would be chances for Raphinha as that trio start to come towards the end of their time leading the line for Liverpool, something we have already seen glimpses of so far this season.

Add in the fact that Raphinha has shown he is good enough to fill that role, and he would surely be an appealing target for the Reds, which given their appeal, will no doubt be a concern for Leeds.