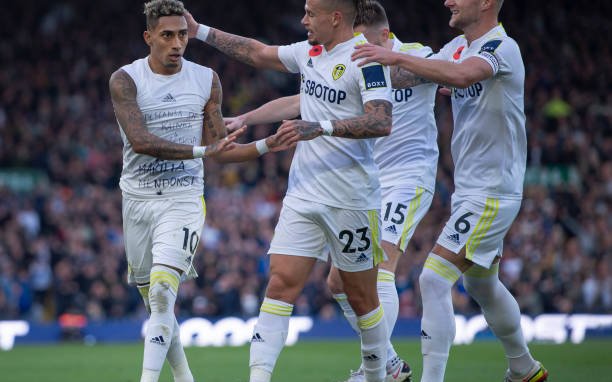 Leeds United look set to see the departures of two key players during the summer transfer window, in the form of Kalvin Phillips and Raphinha.

Following much speculation about the futures of the pair in recent months, Phillips now appears to be on the verge of a move to Manchester City.

Meanwhile, Chelsea have reportedly agreed a fee with Leeds for the signing of Raphinha, although it has been suggested that Barcelona are still working to do a deal for the winger themselves.

Whatever happens, it seems certain that Leeds will receive some major fees for the sale of the pair, who have both been vital to the club’s success in recent years.

So with that in mind, we’ve taken a look at where the reported fees for Phillips and Raphinha, stand among the five record transfer fees that Leeds have ever received.

Hasselbaink’s time at Leeds was relatively brief, but he certainly made an impression while at Elland Road.

Joining from Portuguese side Boavista in 1997, the striker scored 47 goals in 87 games in all competitions for Leeds, and was joint winner of the Premier League Golden Boot in the 1998/99 season.

However, the summer of 1999 saw Hasselbaink sold to Spanish giants Atletico Madrid for a fee of £12million, making his sale the fifth highest fee that Leeds have ever received for a single player.

Another striker to spend two years as a Leeds player, Wood made the move to Elland Road from Leicester City in the summer of 2015.

The New Zealand international scored 44 goals in 88 games for the Whites, including 30 during the 2016/17 season as Leeds narrowly missed out on a place in the Championship play-offs.

That prompted Burnley to move to bring Wood to the Premier League in the summer of 2017, with the Clarets breaking their transfer record to secure the signing of the striker for a £15million fee that puts him fourth on this list.

With Leeds having broken their transfer record to make Ferdinand the world’s most expensive defender when they signed him in November 2000, the centre back’s Elland Road exit would also make history.

As the Elland Road club battled to raise funds after falling into a precarious financial position, the club were ultimately forced to sell Ferdinand to bitter rivals Manchester United in the summer of 2002.

Although the fee of £30million received for Ferdinand was short of the £35million Leeds apparently wanted for him, it was still a British transfer record that made the England international the World’s most expensive defender again, and Leeds’ record sale until this summer.

One player who has been at Leeds for well over two years who looks set to make this list imminently, is Kalvin Phillips.

Having come through the youth setup at Leeds, the midfielder has now made well over 200 first-team appearances for the club, playing a vital role in the club becoming a Premier League side again, while also establishing himself at international level with England.

That story looks as though it will soon be coming to an end though, with Manchester City having reportedly agreed a £42million upfront fee, with further add-ons potentially to come, which should make Phillips Leeds’ second most expensive sale of all time.

It seems the only person who Leeds will receive more for than Phillips, is the man who looks set to follow him out the Elland Road exit door this summer, Raphinha.

After two years with the club that have seen him shine in the Premier League, the winger now looks set for pastures new this summer, with Chelsea having reportedly agreed a £55million fee for his services.

While Barcelona may still try to hijack that deal, they will surely have to at least match that offer that has been made by Chelsea if they are to agree a deal with Leeds for the Brazilian international, meaning one way or another, Raphinha looks well set to become Leeds’ most expensive sale of all time.