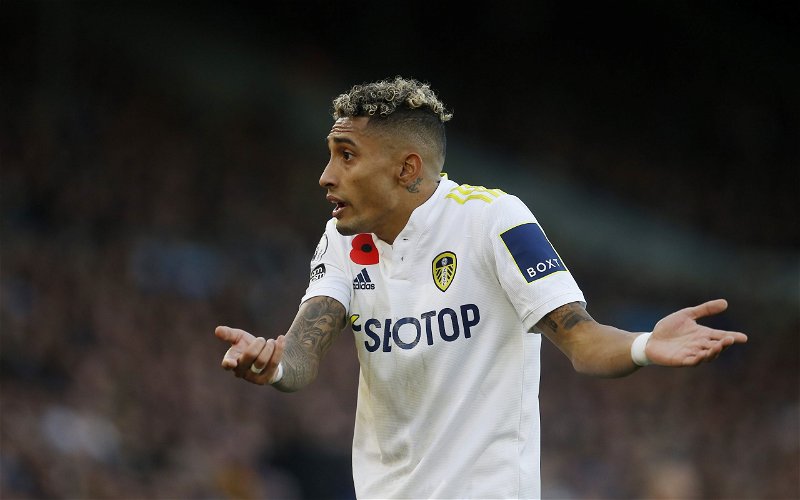 Marcelo Bielsa could recall Raphinha, Rodrigo and Jamie Shackleton to Leeds United’s starting lineup when they face Brighton on Saturday.

That’s according to the club’s former striker Noel Whelan, who believes the importance of this game means having the trio back available could be crucial.

Raphinha, Rodrigo and Shackleton were all absent from Leeds’ trip to Tottenham last Sunday, for various reasons related to illness and injury.

Despite a much improved performance, Bielsa’s side were still beaten 2-1 by Spurs, meaning they are currently 17th in the Premier League table, just two points clear of the relegation zone.

Providing an update on those three players ahead of the trip to the AMEX, Bielsa confirmed they will all be available for that game.

Now it seems that Whelan feels that given they are fit, the trio must all come straight back into the starting lineup for tonight’s game.

Speaking to Football Insider about how they should be used for this game, Whelan said: “There’s a case for all of them to go back in.

“I think when you’re looking at the magnitude of the games coming up, the next two games in particular, we’re going to need some experience and a little bit of extra quality out there.

“No disrespect to the other players. I thought the first half against Tottenham they were excellent. They showed they can go up against an outfit full of superstars in their side.

“At the same time, a defeat is a defeat. This is a game you would like to think there’s a good strong possibility of taking three points.

“Even though they’re a massively improved side, Brighton, they play some smashing football, you’ve got to be going there with confidence and that mindset of we need to get three points out this game.

“Having three big players back for this weekend’s match against Brighton is massive.”

It does seem as though Whelan has a point with what he is saying here.

Despite their strong start to the season, Brighton are coming into this one on the back of a poor run of form, failing to win any of their last eight games in all competitions.

As a result, this looks to be a match Leeds ought to be targeting for three important points to help move them away from the bottom three.

Given the influence and experience that these three can bring to the side – Raphinha in particular – bringing them back into the XI would surely help Leeds’ chances of claiming the win here.