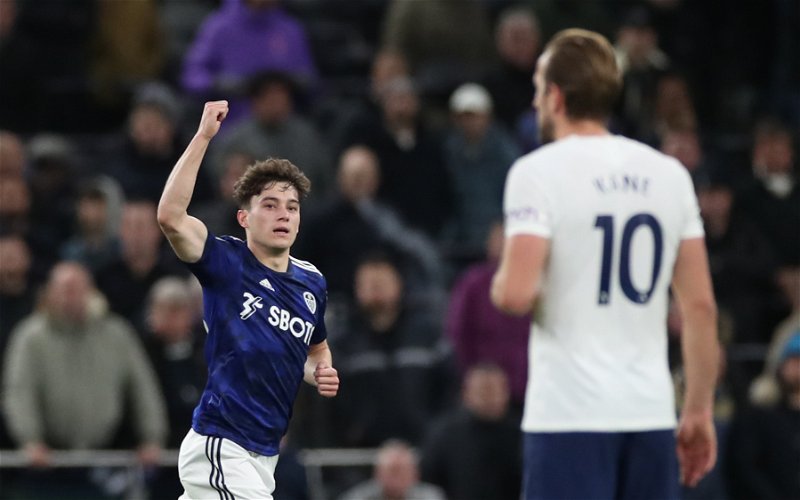 Dan James produced his best performance in a Leeds United shirt in their 2-1 defeat to Tottenham on Sunday.

That’s according to the former Leeds and Spurs goalkeeper Paul Robinson, who believes James is continually improving with his performances.

More than two years after a move to Leeds fell through, James finally joined the Whites on the final day of the summer transfer window from Manchester United.

It had been a slow start to life at Elland Road for James, with the winger failing to score in his first ten games for the club.

However, that changed on Sunday, when James was on hand to fire in at the back post to get on the end of Jack Harrison’s cross to give Leeds a deserved 1-0 half time lead in North London.

Although Tottenham would battle back to claim a 2-1 win in the second half, it seems Robinson was still impressed by James’ performance for Leeds, in the absence of some key attackers.

Giving his verdict on what he saw from James in that match, the ex-England international told MOT Leeds News: “Definitely the best game we’ve seen of him.

“He’s been improving every week, we saw some end product this week as well – something he’s been criticised for. Bielsa is going to take time to work with him and turn him into the player he wants.

“We’re starting to see some end product, when I saw the teamsheet I feared for Leeds with no Raphinha, no Rodrigo, no Bamford.

“Dan James took it upon himself to lead the line behind Gelhardt and he did really well.”

It does feel hard to argue with Robinson’s assessment of James here.

The winger had probably not quite lived up to expectations during his first few weeks at Leeds, but that did seem to change here.

He caused plenty of problems for Spurs going forward, and his goal should now have him brimming with confidence that he can continue to make an impact for Marcelo Bielsa’s side.

Indeed, given the amount that Leeds paid for him, that may well be a big relief for them, in order to ensure they get a return on their investment.