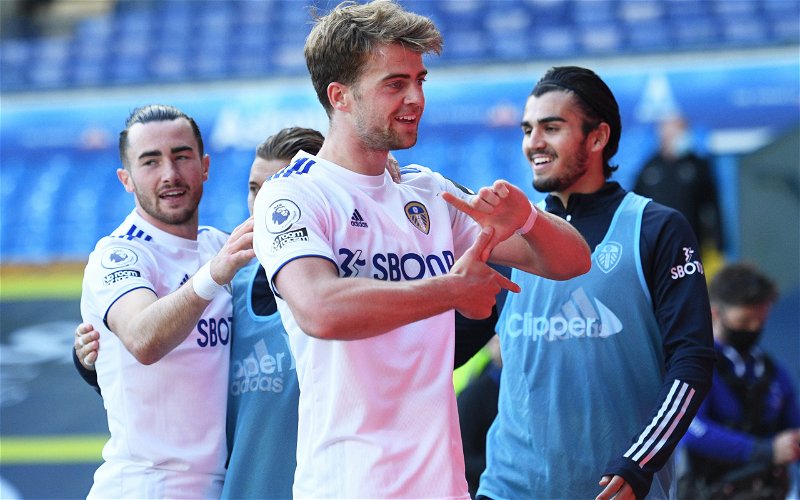 Patrick Bamford’s start to life back in the Premier League with Leeds United is seeing him gain a lot of admirers, especially following strong criticism in the Championship.

One of the main reasons Leeds weren’t promoted until the penultimate game of the season in 2019/20 was the lack of cutting edge in the final third relative to the amount of chances they were creating.

This wasn’t just an issue with Patrick Bamford’s conversion rate but also to do with everyone else struggling to chip in with regular goals behind him, but it has to be said that Bamford was a big contributor.

Despite ending as Leeds’ top scorer in a title-winning season, fans couldn’t help but wanting more from the number nine as his 16-goal haul could have easily been doubled with more ruthlessness.

Fast forward to the Premier League season and Bamford has already made his presence known against the world’s best defender, forcing errors and chipping one of the world’s best goalkeepers.

Into his second game, Bamford was a constant thorn in the side of Fulham’s defence once again and made his mark on another 4-3 thriller, this time helping Leeds to being on the right end of the scoreline with some brilliant work up top.

Having won a penalty for Matuesz Klich to make it 2-1 to the Whites, the roles were reversed when Klich teed up Bamford to casually roll home a stunning third for Leeds.

His assist for the game came via some great speed and trickery out wide, to then lay the ball on a plate for Helder Costa to smash in a fourth and it was just what Marcelo Bielsa needed from his frontman.

Speaking on TALKsport, former England striker Darren Bent commented on the somewhat unfair criticism of Bamford after helping Leeds to promotion and getting their feet under the table in the Premier League. He stated:

You can just tell that he’s absolutely loving it.

He’s been absolutely superb and probably their best player, two assists and a goal.

He gets a lot of criticism and last season he was their top goalscorer.

They were the best team in the division and yet he seemed to be the only player that got no credit for getting promoted.

Bent is spot on here that Bamford has received such unfair criticism as he led the line to the league title last season.

Even if his goals tally wasn’t ideal compared to what he could have had, his work in every aspect was exemplary and a key reason for why Leeds are getting such success.

Two goals and (essentially) two assists in his first two games of the season should hopefully spur him on to continuing this form into the Sheffield United game and beyond, proving just how good he can be in the top flight.

The clubs Bamford previously played for in the Premier League never game him this much of a chance to hit the ground running and Leeds are seeing the fruits of his labour.