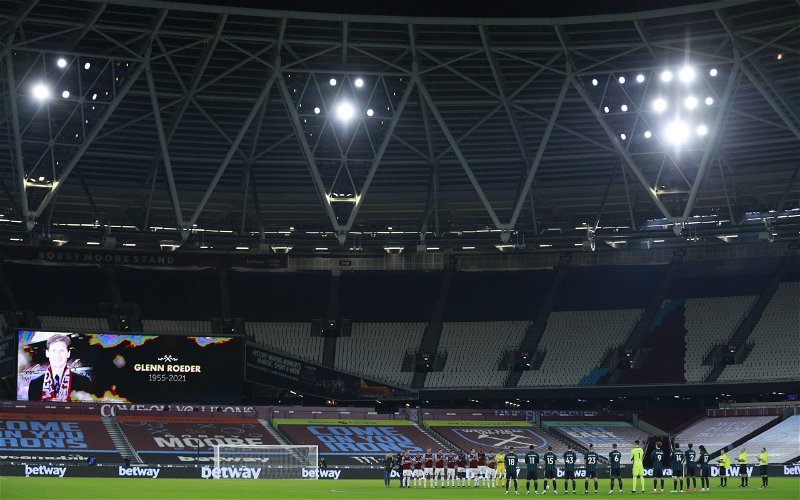 Leeds United were denied two early goals against West Ham on Monday night, with one far more controversial than the other.

Referees in the Premier League have been in the spotlight for all the wrong reasons this season as VAR seems to become more and more baffling by the week.

Constant changes to the handball rule, wafer-thin offside margins and completely absurd penalty decisions have all come this season.

Patrick Bamford has been in the midst of some of the strangest decisions this season, with one coming in the West Ham defeat.

Bamford had a goal of his own chalked off when Raphinha’s cross had strayed just out of play before he played it, but was involved in Tyler Roberts’ disallowed goal which highlighted how farcical VAR has become.

Bamford’s flick-on in the penalty area found its way to Helder Costa, who cut back to Roberts, but Bamford’s slight glance to Costa saw the winger then deemed to be in an offside position, by the width of the skin on his knee cap:

However, an initial line drawn by VAR indicated the opposite:

It’s something Bamford is all-too-familiar with this season and commented on it during the Leeds United Official podcast:

“I touched it [the ball]. I had to or Cresswell was going to head it.” He said.

“But I thought when I touched it that Costa was miles offside so running back I thought it’s one of them but I had to touch it.

“But then I got back in the dressing room and saw it, it was worse… I was annoyed about the one at Wolves with my knee, but it was ten times worse than that.”

Bamford’s offside goal at Wolves was laughable too, with the camera angle giving no indication as to whether he was or wasn’t offside.

The same can be said here, when you have to redraw the lines in VAR until you can feasibly justify an offside call, you’ve gone too far with it.

We’re not the only club to be going through this, but that’s the third call that has gone against Bamford that could easily be deemed onside.

Something needs to change in the summer to address the complete absence of clarity when it comes to refereeing decisions.