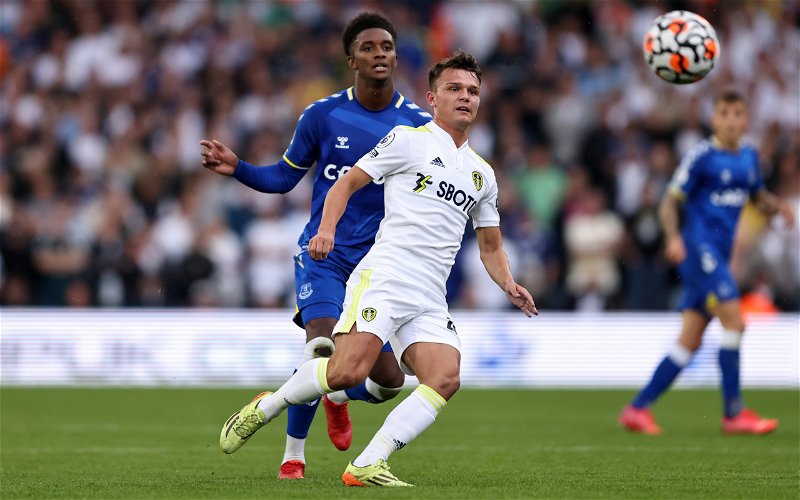 Leeds United could allow Jamie Shackleton a move away from the club, with Reading currently interested.

The Whites are looking for major changes to their squad under Jesse Marsch, after narrowly avoiding relegation last season.

Jamie Shackleton has struggled to make his impact on a regular basis since promotion to the Premier League, and could be subject to a permanent move away this window.

While Reading are exploring a loan move for the midfielder (via Football Insider), the YEP’s Graham Smyth has claimed that a permanent exit cannot be ruled out.

Here, we look at how that departure might affect two other players in the Leeds squad…

With one midfielder potentially set to leave, it opens the door for someone to take his place in the pecking order.

That player we expect to be young midfielder Lewis Bate.

Having signed from Chelsea, he was always bound to catch the eye in the under-23s and expected to make a similar impact at Leeds as his former teammate Tino Livramento has at Southampton.

It’s not quite been that bright a start for him, but his future is still a very big one and with Shackleton out of the squad, it frees Bate up for more involvement, especially with two more subs every game.

Shackleton’s availability to leave the club only drives home the idea that former admired players under Marcelo Bielsa might not get the same treatment now under the watch of a new manager.

Like Shackleton, the step up in division hasn’t been kind to Tyler Roberts, despite his frequent opportunities in the starting lineup.

His form in the back end of 2020/21 was encouraging, but he failed to kick on and only managed a handful of impressive displays last term.

Should suitable offers come in for both Roberts and the club, it would be beneficial for his career and we could generate decent income for a young forward.