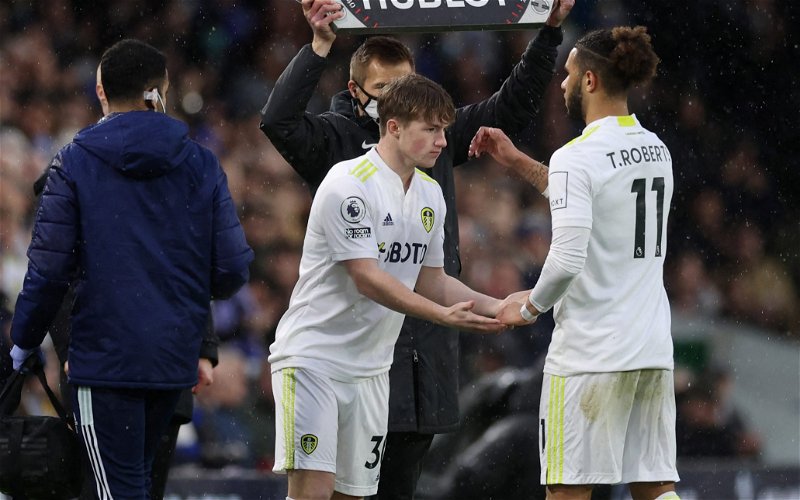 Joe Gelhardt had another telling contribution for Leeds United on Sunday as Marcelo Bielsa’s side fed off an electric atmosphere at Elland Road to beat Burnley.

Leeds had just been pegged back by Maxwel Cornet’s free-kick when Gelhardt got the call to replace the injured Tyler Roberts – starting once more in Patrick Bamford’s absence.

Elland Road lifted with anticipation, Stuart Dallas curled Leeds back ahead and, then, Gelhardt crossed for Daniel James to nod in a third and secure maximum points.

Another feather in Gelhardt’s cap, then, as a Premier League breakthrough continues to bring more and more meaningful contributions.

As our graphic above shows, Gelhardt has done a lot in only 314 minutes of league football.

A goal in Leeds’ defeat at Chelsea has now been matched with his first Premier League assist against Burnley – for comparison, Roberts’ two direct goal involvements have come from 962 minutes.

That stat isn’t there to be a direct swipe at Roberts, Gelhardt is just proving more productive.

The 19-year-old has won two penalties and drawn a total of 13 fouls. The spot-kick he won in October’s 1-1 draw with Wolves was worth a valuable point.

That meeting with Wolves was Gelhardt’s big moment, but this has been a breakthrough that’s been extended into 2022.

Out of possession, Bielsa will ask Gelhardt to work harder than he’s ever had to before. 11 recoveries is a decent return and the South American will like that 54.5% of those have come in the opposition half. It’s relentless and gets Leeds playing in the areas they can punish teams from.

Bielsa isn’t the type of head coach that will overuse Gelhardt and Bamford’s eventual return will lessen his load. We’ve reached the point, though, where the teenager needs to be considered a first-team player. He’s clearly ready and his fearlessness has outgrown the U23s.

In a season so far that has lacked its usual spark, Gelhardt brings the electricity Elland Road thrives on whenever Bielsa gives him the nod.

From now on, there are no excuses to not use him.