Leeds have today announced the signing of Connor Wickham on loan till the end of the season. This came as a pleasant surprise for most Leeds fans. Only yesterday fans were starting to wonder about the club’s future yet again after the Football league released this statement 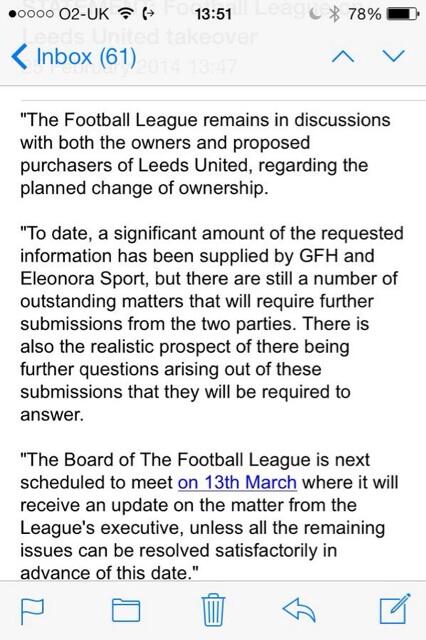 which was deleted pretty soon after. Never simple with Leeds aye?
In my opinion Connor Wickham is the perfect signing right now, the goals have dried up and we now have possibly the best strike force in the championship. Hopefully now our wingers will actually attempt to cross the ball to the 6ft 3 Connor Wickham. After last weekend I thought we had no chance of the play-offs but maybe I can now reconsider. There is usually a late challenge from a team in the championship, you wouldn’t think it could be Leeds but stranger things have happened. News today also came out that Leeds had paid the £1.5m that was owed to Andrew Flowers, you would presume that Cellino paid that. The signs are positive with Cellino so far, signing two young British players on decent wages and paying off some debt. There may be a problem if he doesn’t manage to complete the takeover as Leeds would then owe him money, but lets hope it doesn’t come to that.

A Closer Look at Joe Gelhardt: The Wigan Wonderkid

Leeds Wrap Up Third Signing Of The Season

A Closer Look at Ian Poveda’s First Season at Leeds: A Star is Born

Leeds in Race To Acquire Chelsea Youngster on Loan

A Look at Leeds’ Last Opening Day in the Premier League

Does Kiko Casilla Have a Future at Leeds United?

Leeds Expected To Complete Season-Long Loan for Winger This Week

Could Pablo Hernandez be Destined for Vacant Role at Leeds United?