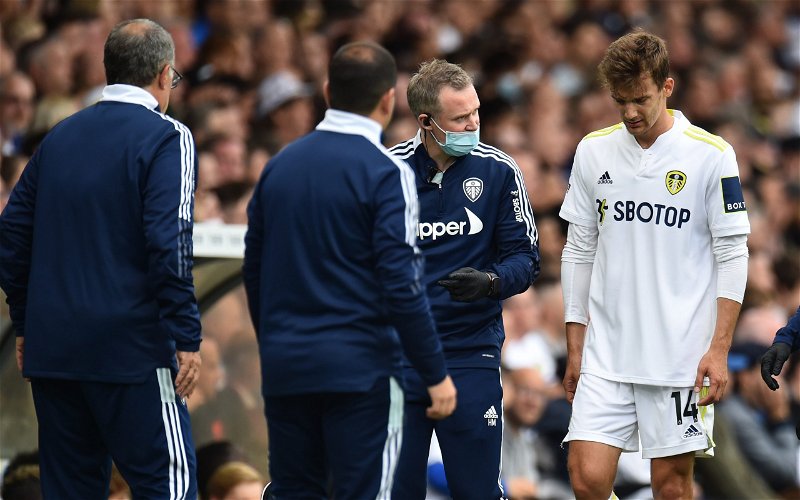 Injuries and suspensions are the dominant topic as Leeds prepare for a crunch fixture with fellow poor starters Newcastle United on Friday.

The main debate has been around the questionable decision from the FA to uphold Pascal Struijk’s ban, but there are other pressing issues in the back four for Marcelo Bielsa.

Spanish international Diego Llorente has been unfortunate in his 12 months at Elland Road, picking up multiple injuries that have hampered his involvement in the side.

What makes it more frustrating is how brilliant we know he has been when he’s had a run in the side, with our end to last season proof of what he brings to the defence.

However, he was brought off after just half an hour against Liverpool on Sunday with yet another injury.

While it has been revealed he is looking at around a fortnight on the sidelines, Patrick Bamford has offered some good news on his current condition.

Speaking on the Leeds United official podcast, the Leeds forward had this to say:

After the game I think he (Llorente) was a bit emotional because I think he panicking that it could be similar to last year which kept him out for a while.

I saw him this morning and he was in good spirits, he was smiling and I think he is alright.

I can see why Llorente was panicking, because he’s been here before and the start to last season must have been awful for him.

He’s such a good centre-back and the sooner he is back in the side, the better for us because he makes our defence far stronger.

That being said, we’ve been here before and we know how to deal with not having many defenders available.

It’s not ideal if we have to shuffle Luke Ayling to centre-back but we can take confidence in the fact he has put in some strong performances there previously.