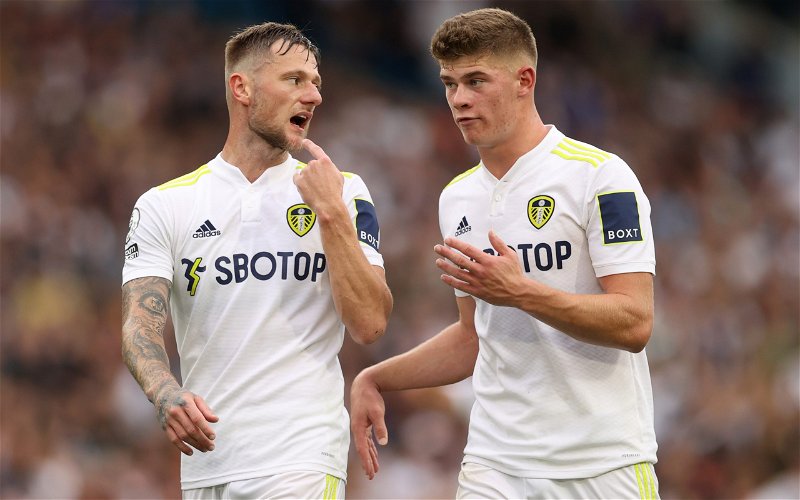 Leeds United defender Liam Cooper has given his verdict on the youngsters coming through as leaders at Elland Road right now.

Under-23 investment has risen the standards of who Leeds have been able to call into the first-team under Marcelo Bielsa.

Injuries have forced his hand in blooding players into the senior setup in the Premier League, but players are showing they’re more than ready to step up.

Joe Gelhardt made his first PL start at the weekend and it’s been a long time coming for the teenager since joining from Wigan Athletic.

He’s one of five teenagers to have made a Premier League debut this season alongside others who have emerged from the academy too such as Pascal Struijk and Jamie Shackleton.

While we’d much rather first-team players be fit every week, the silver lining is that these youngsters are showing Bielsa that the backup plan isn’t totally disastrous.

Liam Cooper has spoken about the impressive cohort currently at Thorp Arch, pinpointing the three he’s most impressed with at present when it comes to leadership- as per the Yorkshire Evening Post:

“Charlie [Cresswell] is definitely right up there.

Pascal [Struijk] has got it in him. He’s not the loudest but he sets a good example. There’s Joffy (Joe Gelhardt).

“They’ve all got a lot of character and they’re all going to go a very long way with Leeds. The potential is there. It’s just consistency at that age.

“I always struggled a bit when I was younger. You can maybe have one or two good games then not be at your best. But they’re all great lads, they want to learn, they take it on the chin.”

What is arguably the best attribute that you can point to about these players is that they are coming into a senior environment and don’t look out of place.

Their confidence stands out and is manifested in how they play, taking the same risks and displaying the same patterns as older players.

In Cresswell and Struijk, we have a readymade international partnership for years to come, while Gelhardt’s emergence speaks for itself in attack.

They aren’t the only three players either, as there are plenty of others showing similar levels of talent as these three such as Greenwood and Summerville.