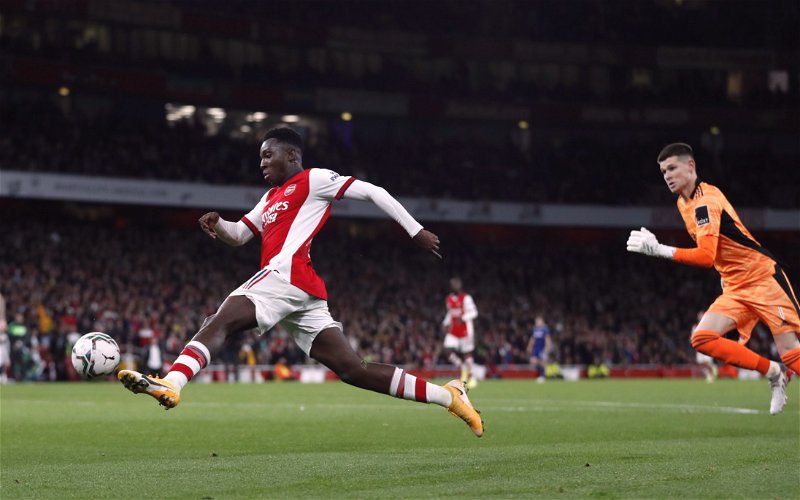 Leeds United would have a significant amount of money to complete the signing of Eddie Nketiah in the January transfer window.

That’s according to Leeds Live journalist Beren Cross, who appears not to be expecting the striker to return to Elland Road any time soon.

Nketiah spent the first half of the 2019/20 season on loan with Leeds from Arsenal. During his time at Elland Rad, the striker scored five goals in 19 games before being recalled due to a lack of starts.

However, Nketiah is now struggling for game time at Arsenal as well, with the 22-year-old’s only appearances for the Gunners this season coming in the League Cup.

That has recently led to some reports claiming that Leeds are interested in a possible reunion with the striker in the January window.

Now though, it appears as though Cross believes that the finances involved in such a deal, mean it would be unlikely to happen.

Speaking in a QandA on Leeds Live about a possible move to bring Nketiah to Elland Road in January, the reporter said: “As much as Leeds fans have a soft spot for him and he knows Bielsa’s system better than most outsiders, the numbers involved would still be massive for a striker like Nketiah.

“If Arsenal are looking to sell him before losing him for nothing in the summer, they’re still going to be looking for well over £15million because he’s a young English talent.

“The wages would not be small either and, at the end of the day, when everyone is fit, he’s not going to play ahead of Bamford.”

While this may be a bit disappointing for Leeds fans, it does seem to make sense.

Nketiah was an understandably popular figure during his first spell at Elland Road, and you do get the feeling the club could benefit from some attacking back-up for Bamford.

However, the funds that Leeds would have to spend here, may be too much given he would be unlikely to play week in, week out.

As a result, you feel as though Leeds may be better off looking towards other potential attacking options as we approach the return of the market.