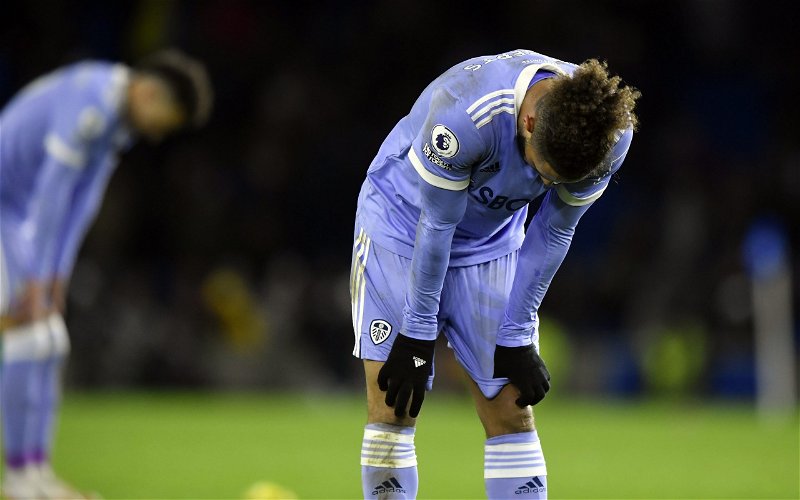 Tyler Roberts provided Leeds United with an unexpected chance of winning on a bleak evening in Brighton on Saturday.

Leeds were second best at the AMEX, yet Roberts stepped off the bench to bring Robert Sanchez into the game, testing him on a number of occasions late on.

Our graphic below outlines the impact the Wales international had in just 30 minutes:

Roberts had four shots on goal: two on target and one deflected effort forcing a Sanchez save. From nothing, Leeds suddenly were in with a shout of three points.

From the 22-year-old’s four touches in the penalty area, he mustered up those four shots. One progressive run and winning two free-kicks also contributed to Leeds wrestling some sort of threat.

The forward retained possession well and completed all of his passes, whilst also managing to win the ball back on two occasions.

It was a chance for Roberts to lead the line for Leeds in the extended absence of Patrick Bamford – he is creeping towards a return now and will play for the U23s in the early part of this week.

Leeds, though, have a fixture against Crystal Palace on Tuesday evening at Elland Road, which surely comes too soon for Bamford.

Roberts, then, has the opportunity to lead the line. Not a last chance saloon in terms of his Leeds future, but certainly a final opportunity to stake a claim that, all along, he was the man best suited to deputise for Bamford.

Daniel James has qualities out of possession that suit the role, whilst Rodrigo has made it clear he’s more influential in a deeper position.

Roberts’ best position still has a tinge of mystery, but occasions like Saturday beg the question why he hasn’t been offered more chances as a No.9.

Perhaps his lack of impact on the season so far hasn’t warranted that.

Out of nowhere, though, he might’ve earned the chance to start a crucial fixture against Crystal Palace. An opportunity, you feel, he must take.