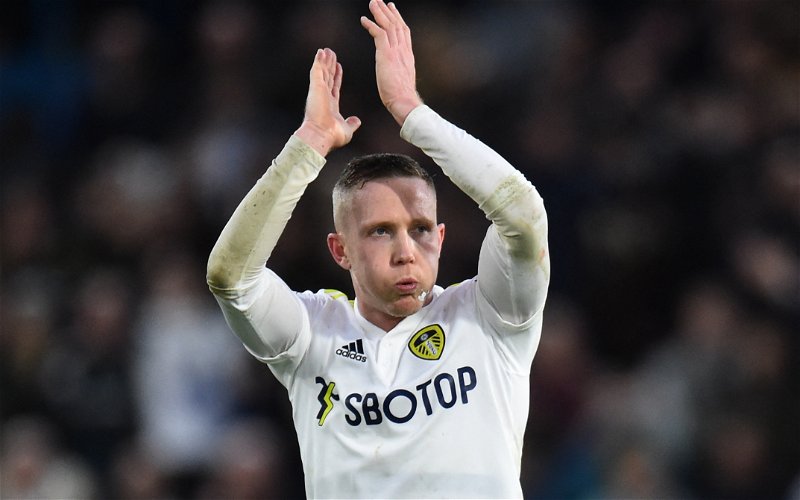 It seems Leeds United will not be without midfielder Adam Forshaw for much longer.

That’s after the player himself revealed that the injury he is currently suffering from, is not a serious one.

Having battled injuries for so long, Leeds fans may have feared the worst for Forshaw when he was forced off early on in last weekend’s 3-2 win at West Ham.

After that game, Forshaw had taken to Instagram to clarify that the setback he has picked up at the London Stadium, was not a serious one.

But despite that, the 30-year-old was still absent from the matchday as Leeds slipped to that damaging 1-0 defeat to Newcastle at Elland Road on Saturday afternoon.

Now however, it seems Forshaw may not be missing much more action as a result of this injury, with the club next in action on the 9th February, when travel to Aston Villa.

Appearing on LUTV’s coverage of the Newcastle game, Forshaw was asked if he would be back in action after the upcoming international break, with the midfielder quoted by Leeds Live as saying: “Definitely. It’s not a case of us saying I’ll be fit soon like with that longstanding injury. I’ve got a minor hamstring, I’ve been doing really well.

“I’ll be training probably by the beginning of the following week, in plenty of time for Aston Villa.“

This will be a big relief for those of a Leeds Unitd persuasion.

Forshaw has been hugely impressive since his return from injury, performing admirably to help fill the void left by Kalvin Phillips’ own fitness issues.

As a result, Leeds fans will want him back as quickly as possible, especially with Robin Koch struggling to make the same kind of impact while filling in in that position against Newcastle.

Indeed, with there now being some extra time for several of Leeds’ injured players to make progress with their recoveries, it seems the international break may have come at a good time for Marcelo Bielsa’s side.