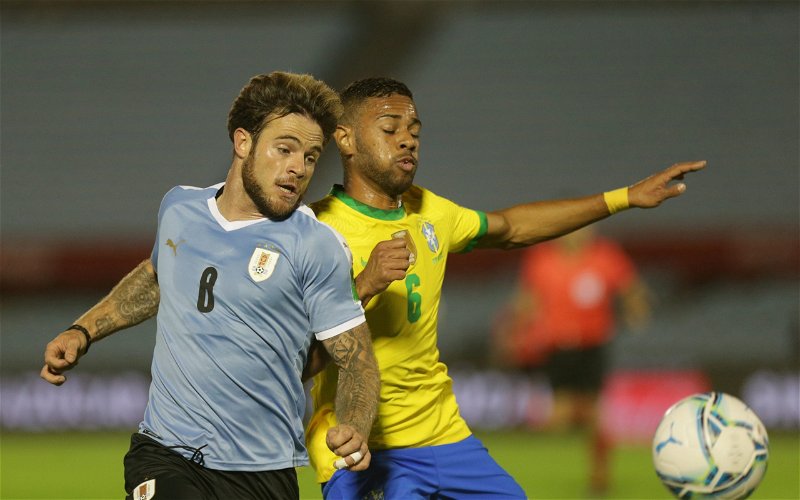 Previously Leeds United linked midfielder Nahitan Nandez has reportedly revealed that he intends to leave the Serie A this January or summer.

The summer transfer window passed Leeds by without a key midfield signing brought in.

It wasn’t as if Leeds didn’t make their intentions known in that regard though, pushing to sign two players for that position but falling short on both counts.

It never seemed as if a marquee acquisition for the midfield was ever in the club’s mind as first a Conor Gallagher loan deal was turned down before a £4million offer for Lewis O’Brien was rejected too.

One player who was at the other end of Leeds’ budget and heavily linked with a move was Cagliari star Nahitan Nandez.

The Uruguay international has been linked with a transfer to Elland Road from as early as 2019 and this summer saw a whole manner of reports from Italy claiming he was edging towards a move here.

Nothing materialised and now he’s still itching for a move with Tottenham now credited with interest. Calcio Casteddu are also reporting that the midfielder is looking to move away from the Serie A as the January window looms.

It is looking increasingly likely that Cagliari will allow the player to leave this summer at the latest.

I can’t see us making a move for Nandez anytime soon with how much they’ll be demanding.

We do need another midfielder in the coming months and a January swoop might be on if the right player becomes available.

However, if there’s any overvaluation in a player I won’t expect us to even cast an eye.

We’ve got to expect that we’re going to have to get by without many key names in the middle of the park because January hasn’t been kind.

Jamie Shackleton has a big few months ahead of him.