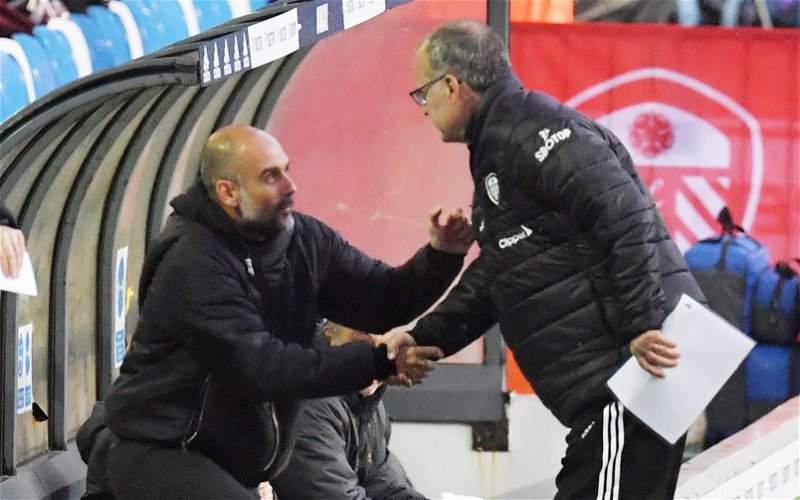 Marcelo Bielsa has offered his verdict on the potential punishment of the clubs involved in the breakaway European Super League, as Leeds United prepare to host Manchester United.

The Whites have shown this season the benefits of having a fair competition, and in Bielsa, the club has one of the purest embodiments of the what football is about.

This week has seen Premier League discussion dominated by proposals of a European Super League, that went down in flames quicker than Leeds’ infamous ‘salute badge‘.

With plans for the ‘ESL’ in tatters, it now comes chance for the governing bodies in charge to impose laws to stop this from ever happening again.

Not only that but outcry from the majority of fans has been to dish out strong punishments for even trying to do something so bad.

The argument against such punishments is that ‘the fans and players are being punished for something they had no say in’, but no one batted an eye when Leeds were docked 25 points over two seasons.

With Leeds facing one of those 12 clubs this weekend (Manchester United), Bielsa was bound to be asked about what punishment, if any, he thinks the clubs should face.

He had this to say, via Leeds Live:

I don’t think that the path for a solution is for these clubs to be punished but to convince what is best and to come up with rules of acceptance in general and make sure these rules are adhered to.

When a rule is broken it forces a sanction, it means that the process before that was not sufficient. And the leadership of the organisation to administer the interests of everybody is to create rules that everyone is able to adhere to as they’ve all accepted them.

I am of the opinion that punishment is more for authority and shows that the quality of the efficiency of the rules was in question.

It’s not at all surprising that Bielsa has given this view on how to deal with the clubs.

We might see more bold claims come from different managers this week, but we know that Bielsa’s ideas in this regard will be to ensure the right models are in place rather than punishing clubs for exposing the incorrect ones.

However, I’m not quite on the same page as the boss here, because such a vile attempt at altering the football ladder to suit these owners’ pockets should be punished as largely as the situation itself suggests.

They tried to change the fabric of football in Europe to keep themselves in power and bringing in the majority of wealth. For that, they should certainly all be banned from Europe for multiple years, at least.