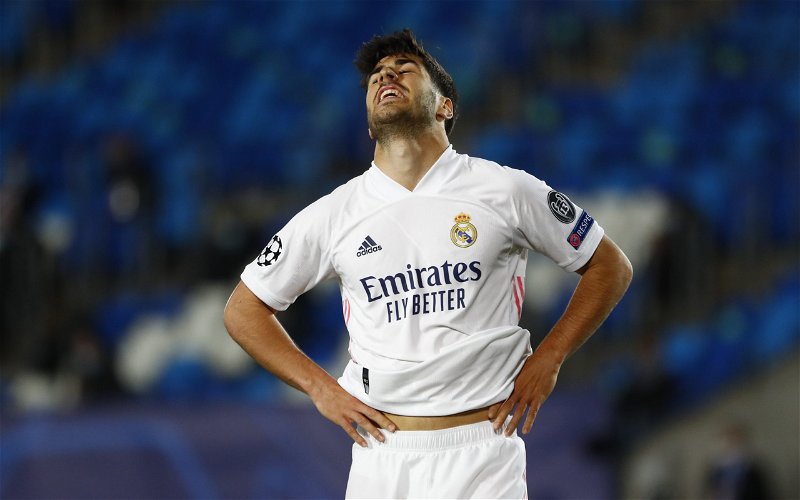 Leeds have been very alert in the transfer market to take advantage of the financial situations concerning other clubs in Europe.

Cut-price deals have been on the cards in the past two seasons for the Whites following a tough period for many clubs as fans were shut out from stadiums, and La Liga has been hit hard.

It means giants Real Madrid could be seeing plenty of outgoings, and Leeds could be on the hunt for another signing from the Bernabeu after Kiko Casilla.

Pablo Hernandez’s departure means that Leeds now have a void in the squad that could be filled by a creative attacking midfielder or winger, that can operate anywhere behind Patrick Bamford.

Spanish outlet Fichajes are now claiming that Real Madrid midfielder Marco Asensio is on the club’s radar along with Everton and Leicester City.

As Carlo Ancelotti looks to trim his squad with outgoings, Leeds are seemingly on alert to bringing in the Spanish international.

However, the report also explains that Asensio would be a Plan B option for Bielsa is he can’t land top target Adama Traore.

I really can’t see us chasing Asensio but stranger things have happened and our signings of both Rodrigo and Firpo are proof.

Spanish clubs are struggling right now and top quality players are available to sign, so there’s logic to the links.

That being said, Asensio isn’t a player the club will be pursuing aggressively at the moment with a central midfielder the main priority.

The Spaniard is definitely one worth keeping an eye on in general because we could well be seeing him playing Premier League football soon.