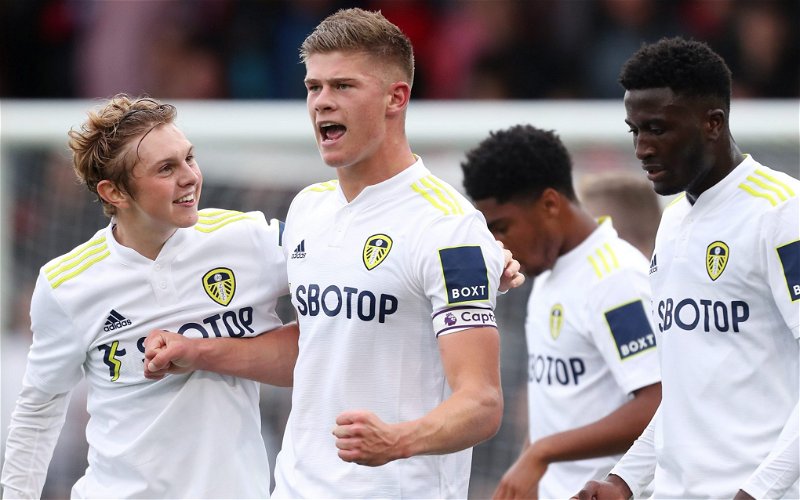 Leeds United defender Charlie Cresswell is set to sign a new contract after the club turned down an approach from Sunderland to sign him.

Leeds’ under-23s are heading into the 2021/22 season with a lot of promise as they face their toughest challenge yet in the PL2 Division 1.

Fresh faces have helped the side improve this summer while existing talents will be hopeful of continuing their progress under Mark Jackson.

Leading the march for the under-23s is captain Charlie Cresswell, who is already impressing in pre-season with some strong performances at centre-back, including a bullet header away at Fleetwood Town last week.

With one senior appearance to his name, he’s still knocking on the door for regular first-team recognition, but there’s plenty of competition in his position.

While some have been loaned out, Bielsa is eager to keep him close by, with People journalist Ross Heppenstall revealing the club have turned down an offer from Sunderland to take him on-loan this season.

The England youth international is also set to sign a new deal to keep him at Elland Road long-term:

It’s a no-brainer to keep him close by and tie him down to a new deal really.

As much as I’d be happy to see Cresswell go out and get crucial senior exposure, Bielsa’s eagerness to keep his best youngsters at Thorp Arch highlights where he sees Cresswell’s future.

Olly Casey leaving shows that Cresswell is valued more and he’s certainly going to have a part to play soon.

We’ve got very good options in front of him and while he might be frustrated, he’s learning from great role models in his position.