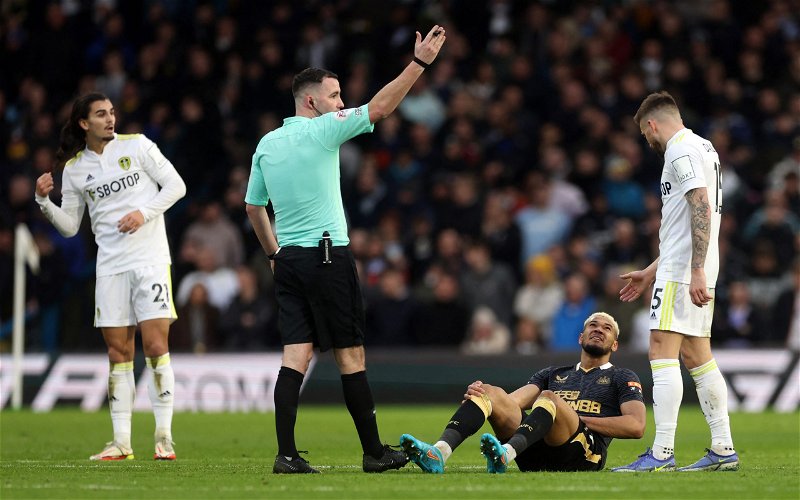 Marcelo Bielsa has stated that the officials had sufficient tools to prevent Newcastle United’s time-wasting during yesterday’s 1-0 victory over Leeds United at Elland Road.

Leeds were beaten by Jonjo Shelvey’s 75th minute free-kick, with Bielsa’s side made to pay for not making the most of first-half openings.

A clear tactic of Newcastle’s was to slow the game down when Leeds tried to build momentum, which became far more intense after Shelvey struck the winner.

Discussing the time-wasting on show, Bielsa explained (via Phil Hay) how he felt the officials had the tools to prevent Newcastle’s tactics on the day.

”What you signaled was evident. Those in charge have sufficient tools to prevent it.”

The time-wasting came from the off, with Kieran Trippier and Martin Dubravka setting the tone.

Interestingly, despite the obvious nature of Newcastle’s time-wasting, only Paul Dummett was booked, whilst Allan Saint-Maximin was also cautioned for dissent.

It’s not often that Bielsa comments on the officials in this way.

Granted, he’s not calling them out outright, but in a roundabout way he’s stating the officials should’ve done more to stop Newcastle’s time-wasting.

It was irritating, but they aren’t the first side to come to Elland Road and do that this season – Wolves, Crystal Palace and Brentford have all done the same.

Newcastle’s time-wasting felt worse, but that might be because Leeds took points off the other three teams.

Leeds just couldn’t find a way of overcoming it yesterday.