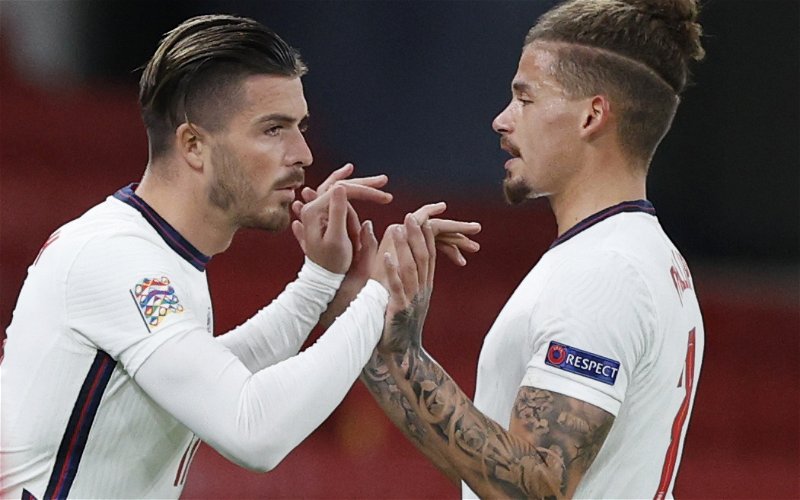 Aston Villa’s Jack Grealish has returned to action after a lengthy injury lay-off, and Leeds’ Kalvin Phillips has reacted to the news.

There’s a lot of similarities between Leeds and Aston Villa at the moment.

Both sides are enjoying great seasons battling for a top half finish after recently clinching promotion back to the Premier League.

Another is that both sides rely heavily on the influence of one key player, Kalvin Phillips and Jack Grealish respectively.

Grealish and Phillips shared a landmark moment together on international duty back in September when they both made their debuts against Denmark.

The Villa talisman replaced Phillips in a lacklustre Nations League affair, but they’ve both shown they should absolutely be in the squad for the upcoming Euro’s.

While Leeds fans might not have much time for Grealish, it’s clear the two have a good connection from their time with the Three Lions.

Grealish’s recent 12-game absence came to an end with a cameo against Everton this week.

Amongst those congratulating the Villa captain on his return was Phillips:

It’s not a great sight for Leeds fans who don’t like Grealish, but he is to Villa what Phillips is to us.

Their form without him has been just as shoddy as ours always is without Phillips.

It’s good to see that he’s building these friendships with players in the England squad.

It shows that he’s making a lasting impression when he’s away with the rest of Gareth Southgate’s squad.