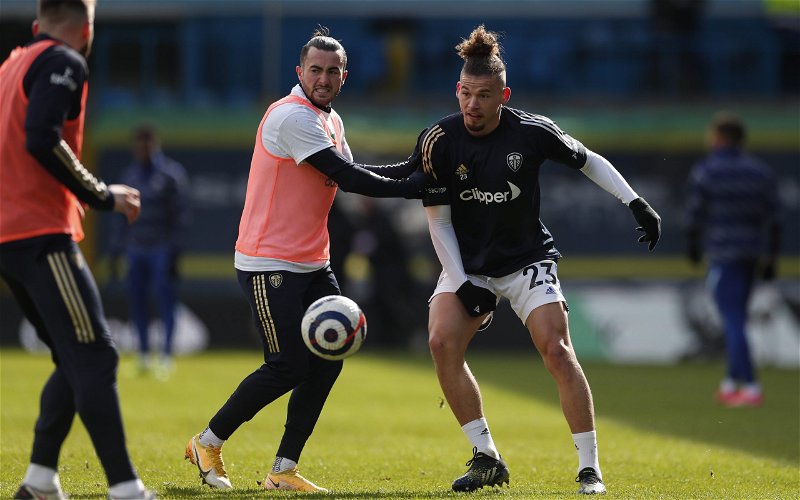 Kalvin Phillips was very close to leaving Leeds United in the summer of 2019, but a close family discussion convinced him to remain at Elland Road.

Heartbreak in the 2018/19 play-off semi-final left Leeds United in limbo surrounding a handful of key figures.

Namely, the futures of Marcelo Bielsa and Kalvin Phillips were almost in tandem that summer, if one left, the other was definitely following them out of the door.

So, when Aston Villa came calling for Phillips, it was paramount for the following season’s promotion charge that he was kept at all costs and signed onto a long-term deal.

Phillips signed a five-year deal, ending any speculation surrounding his future, after strong interest from Dean Smith’s newly-promoted Villa side.

Reports claimed that the Villans tabled a bid amounting up to £25million for the Yorkshire Pirlo, but his and the club’s future have since proven far more valuable than that, even if it should have been enough to sell him.

Phillips has since commented on the interest from Villa in an interview with The Times, sharing an insight into how his family were able to convince him to remain at Leeds.

“I was swaying towards Villa but my mum and my gran said, ‘You’ve got a job at Leeds to do, if you get promoted with Leeds you’ve been here all your life, so why not one more shot to try and do it?’

“As soon as my mum said that I never looked back and look where it got me – to the Premier League, to play for England.

“There’s some things you can’t explain but I know that if I didn’t have that relationship with my mum, I wouldn’t be where I am now.

“She’s been to so many lows to get me to these highs, so the one person I’ll share it with is her.”

We managed to get an insight into his family ties in the Take Us Home documentary and it showed everyone just how grounded Phillips is and how level-headed he has been, despite being thrusted to this hero status.

His family have had a huge part to play in that, and it’s great to see that he’s not shying away from that despite being an England international.

It’s definitely been a case of ‘all’s well that ends well’ for all parties though, with Leeds and Phillips shining in the Premier League and Villa turning their attention to Douglas Luiz and getting a very good signing in him.

There’s no reason why he should entertain leaving for a while now, given where we look to be in the coming seasons.