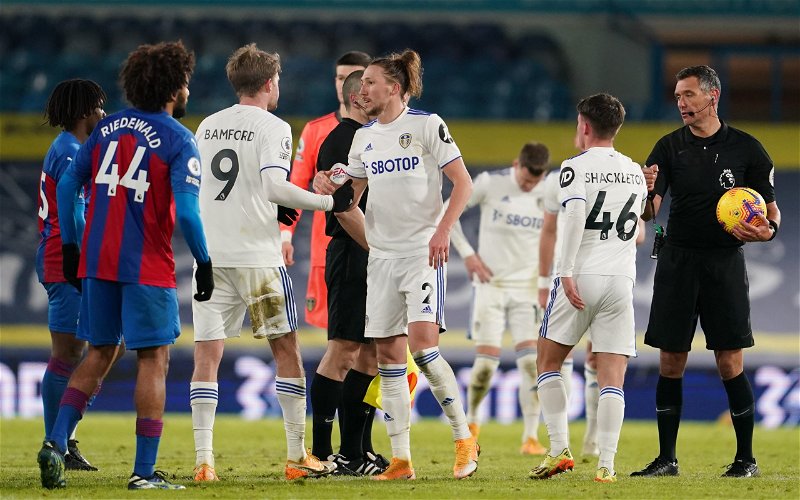 Tuesday night’s clash with Crystal Palace could be the game that sees Leeds United spark into life this season.

That’s according to BBC Sport pundit Mark Lawrenson, who has tipped Marcelo Bielsa’s side to claim all three points when they face the Eagles on Saturday afternoon.

This season is one that has still yet to get going for Leeds United. Saturday’s goalless draw with Brighton means they have now won just two of 13 league games this season.

That means they start the week 17th in the top-flight table, just three points clear of the relegation zone, having played a game more than 18th placed Burnley.

By contrast, Palace have enjoyed a solid start to life under Patrick Vieira following his appointment in the summer.

Saturday’s 2-1 loss to Aston Villa was just their third in the league this season, and they go into this one 11th in the standings, four points better off than Leeds.

However, it seems Lawrenson still believes the hosts can take all three points at Elland Road this evening. Writing about the game in his BBC Sport predictions column, the former Liverpool defender said: “Leeds have only scored 12 goals in their first 13 games of this campaign, compared with 22 by the same stage of last season.

“That’s a big reason why they are not winning many games – they held on for a draw against Brighton on Saturday, but they are just not the same threat they were going forward.

“It might take until Patrick Bamford returns from his ankle injury to get the Leeds attack firing again but they are not on a bad run of results, having lost only one of their past five league games.

“This is a tough one to call, because Crystal Palace have been playing well. I just have this feeling Leeds will burst into life soon, the way Leicester did against Watford at the weekend.”

As a result, Lawrenson has predicted Leeds to claim a 2-1 win from this one.

It wouldn’t feel like a huge surprise if Lawrenson was to be proved correct with his prediction here.

As a result, it may be that one moment of magic that proves to be enough to separate these two sides in what could be a rather tight encounter.

In someone such as Raphinha, Leeds do have an option who can come up with those big moments, and potentially deliver them what would be an extremely welcome win.