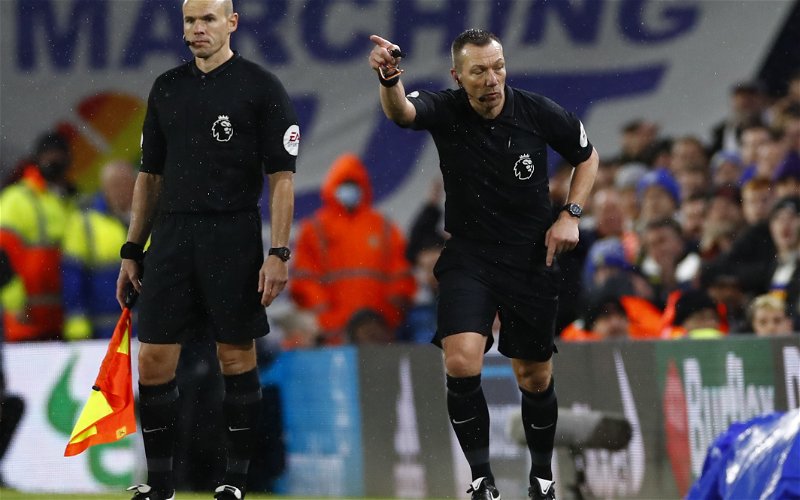 Leeds United were on the right end of a VAR decision this week as Marc Guehi was penalised for a handball in stoppage time against Crystal Palace.

The Whites have not been lucky when it’s come to refereeing decisions this season, on the wrong end of controversy quite often.

However, they got a huge slice of luck late in the second half at home to Crystal Palace on Tuesday night.

As Leeds won a late corner, Liam Cooper jumped to head home what would have been a late winner, only to be denied by the outstretched arm of Palace defender Marc Guehi.

Referee Kevin Friend was consulted to visit the pitch-side monitor where a brief look at the incident saw him give a penalty, which Raphinha tucked home.

As the Match of the Day panel reviewed the match, they were in unanimous agreement over whether Friend was right to give the spot-kick, with Danny Murphy stating:

“Even Patrick Vieira admitted that it was a penalty, he understands the rules, the players do now, and they’ve got to be very careful.

“It was a super penalty in injury time under pressure. Six of their 13 goals he’s [Raphinha] got. He was the star of the show, it was a big relief for the Leeds fans because you could see the elation at the end, and it was a huge win for them given where they are in the league.”

It wasn’t the only penalty shout of the game, though, with the Eagles’ Jordan Ayew going down under a challenge from Pascal Struijk in the first half, as Friend waved away appeals.

Former Swansea man Ashley Williams believes he got this one right too:

“It’s no penalty for me. It’s not enough, it would’ve been very harsh on Leeds if that was given and I think Jordan Ayew is looking for it, he goes down a bit soft and I’m glad the referee didn’t give that because they’re the soft ones that you don’t want to see as it’s a contact sport and it’s just kind of a coming together.”

I thought Friend refereed the game very well to say there were a couple of major incidents.

The penalty should have been given in real time but he handled everything with calmness and never looked like the game was getting out of his control.

It’s rare we say that about a refereeing performance but he did well to allow both teams to keep their rhythm.

It is frustrating that we have such low standards of refs that when one does the right things, it’s commended a lot.