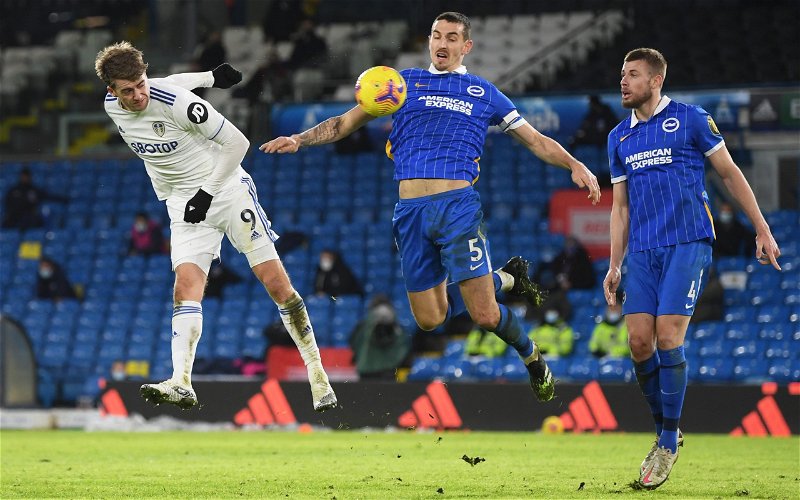 Ally McCoist has lept to the defence of Leeds United after their flat performances against Brighton at the weekend where they lost 1-0 at home.

Leeds have been hit and miss in the Premier League this season as they sit 12th in the table, but that’s to be expected after just clinching promotion.

However, with the way a lot in the media are analysing the state of play, you’d either think we should be pushing for the top four, or that we’re rock bottom and destined for the drop.

We played the Seagulls looking to bounce back from a tame start to 2021, aiming for our first win of the calendar year.

Graham Potter’s men put in a strong showing at Elland Road and came away with the win thanks to Neal Maupay’s first-half strike following a great flowing move.

Questions were bound to arise after full-time about whether Leeds and Marcelo Bielsa’s style is sustainable, despite us all knowing we won’t change.

Speaking on talkSPORT (Monday, 7:30am), Ally McCoist defended the Whites after yet another narrow-minded verdict from Gabby Agbonlahor where the former Villa man claimed we looked ‘tired’ and needed to rotate.

McCoist responded: “No, I don’t think they’re tired, it’s just how they play the game.

“I genuinely think Leeds will be okay and they’ll continue in the fashion they are.

“They’ll entertain, win games, leave you bewildered with their defending at times… That’s just the way they are.“

Thankfully there’s someone talking sense in that studio.

We’re clearly not tired because we got better as the game went on, it was just a really poor performance.

Brighton set up very well and put in a top class defensive display which they deserved to win from, but we didn’t help by mustering up little.

A large gap separates us and the bottom three and I don’t think we should even be in the question at the moment.

There’s a lot of football to be played and the fact we’re 12th heading to the halfway mark is a huge achievement, and could even get better if we kick on.