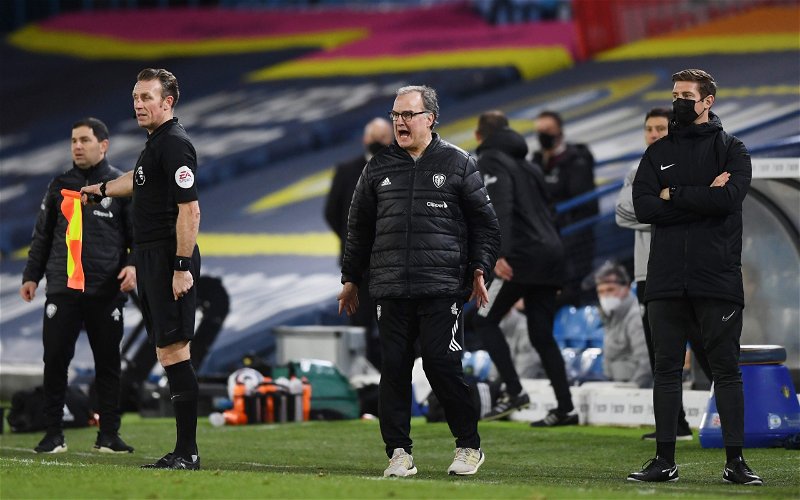 Leeds United remain in talks with manager Marcelo Bielsa about a new contract, and remain hopeful a deal can be agreed.

That’s according to the club’s owner Andrea Radrizzani, who appears confident the Argentinean will be at Elland Road next season.

As is often the case, Bielsa only signed a one-year deal with Leeds back at the start of this season.

Because of that, the Leeds manager is currently on course to be a free agent this summer.

However, Leeds are seemingly taking steps to ensure that that does not become the case, and appear optimistic of retaining the services of their influential manager.

Providing an update on talks over a new deal for Bielsa, Radrizzani told French outlet L’Equipe: “I hope to extend it by the end of the season and I think it is possible. We are in discussions.

“There is a common will to continue and so far we have always got along well. We support Marcelo in his work and I think I can say that he is satisfied with his relations with the management of the club. Hopefully we can continue to work together.”

Despite that, Radrizzani also seems confident Leeds could still move forward without Bielsa, as he added: “Leeds United are bigger than Marcelo Bielsa.

“If one day, for whatever reason, we were to split up with Marcelo, that wouldn’t change our objective, which is to one day put Leeds back to where this club was, so that it can once again play in the Champions League.”

This does seem encouraging from a Leeds perspective.

Bielsa has worked wonders throughout his time at Elland Road, and there is no reason you can imagine anyone at the club would want him to leave anytime soon.

As a result, these comments from Radrizzani, which suggest an agreement is likely, are a good sign for the club.

Indeed, you feel Bielsa himself will want to stay, given it seems as though he can take the club even further than he has done, despite the progress they have already made under him.

Even so, the fact Radrizzani is confident Leeds could continue in the right direction if Bielsa leaves is a good sign, as it highlights that the club’s fortunes are not dependent on any one individual.