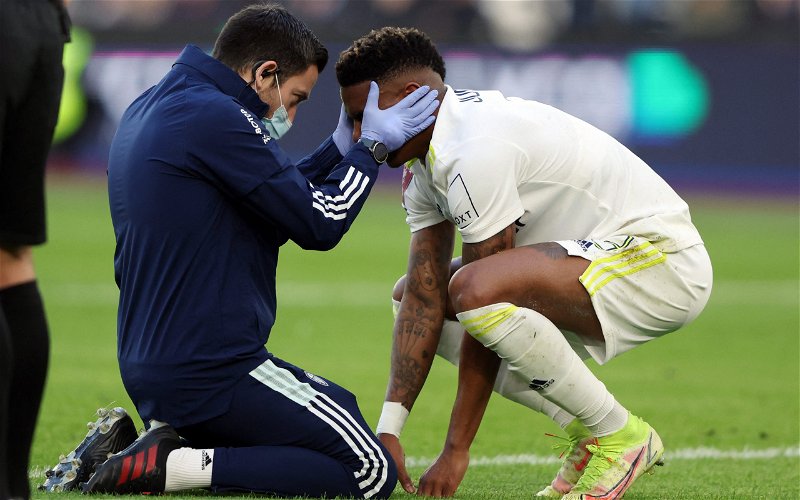 Junior Firpo has revealed that he’s ‘good’ after he was replaced in Leeds United’s FA Cup defeat to West Ham United due to dizziness.

Leeds are without a number of key first-team players at the moment, whilst Diego Llorente is suspended as Marcelo Bielsa’s side head back to West Ham in the Premier League this weekend.

Naturally, with Firpo struggling with dizziness, there’s doubt over his fitness and whether he’s going to be able to feature at the London Stadium this week.

Speaking to the BBC, as quoted in the Yorkshire Evening Post, Firpo confirmed he’s healthy.

“We have just followed the protocols about these types of things in a game but I feel good. I am fit. I am okay.”

The 25-year-old’s season so far has been stop-start, with injuries and illness limiting the left-back to 13 appearances in the Premier League.

You’d imagine it’s still wait and see when it comes to whether or not Firpo is available, especially if Leeds are following protocols with his head injury.

There could well be a chance that he has to miss a week of football.

Hopefully that isn’t the case, with Leeds’ squad so stretched at the moment.

If Firpo is out and Dallas has to cover at left-back, it leaves Leeds short in other areas like central midfield, where they are already without Kalvin Phillips.

It’ll probably be a case of waiting to see what Bielsa says in this week’s press conference regarding Firpo.