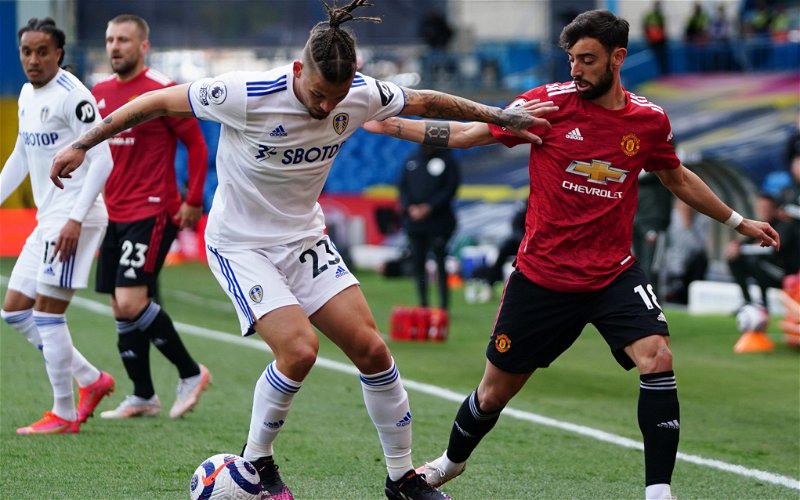 Leeds United star Kalvin Phillips had one of his best performances at the weekend against Manchester United, and Ian Wright was one of those to personally congratulate him.

At the weekend, the Whites welcomed Man United to Elland Road in the Premier League for the first time since the 2003/04 season.

While the match overall didn’t live up to the spectacle everyone thought it might, Leeds’ defensive performance was superb and they did a great job of nullifying one of the league’s best attacks.

One of the main matchups worth watching on Sunday was Kalvin Phillips marking Bruno Fernandes.

The Yorkshire Pirlo got the better of Fernandes throughout the game and limited the Portugal star to very little in the final third.

Obviously, Phillips had his work cut out to do so and deservedly picked up the club’s Man of the Match award after the game.

Now, Arsenal legend Ian Wright has revealed that he and Phillips shared an exchange via message about his performance.

It’s nice to see a real friendship forming between Phillips and Wright, and it’s clear that they share a lot in common as people.

It says a lot about the quality of Fernandes thought that Phillips is saying how hard it was throughout the game.

However, it says even more about Phillips that one of the best players in Europe this season didn’t have a sniff because of the work he did.

Phillips is going to continue being a vital asset to our side for as long as he stays here, and it’s so good to see how he’s getting on against the best sides in the league.