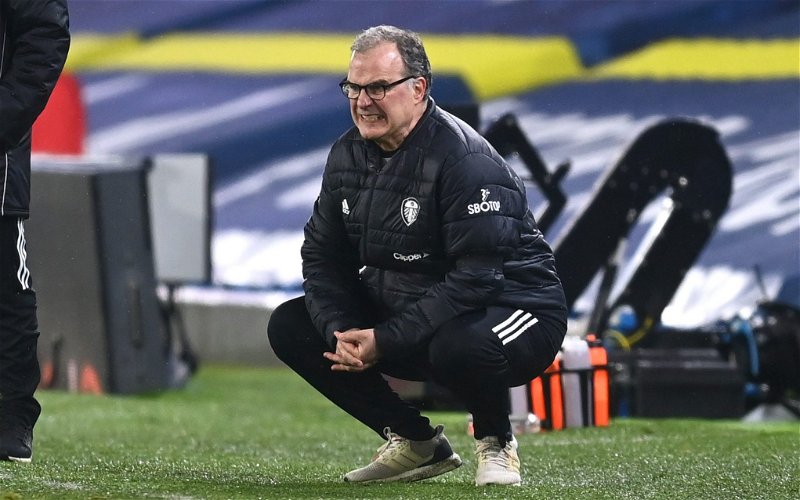 Leeds United manager Marcelo Bielsa has claimed that the new Elland Road pitch only seemed to affect his side during their 2-1 defeat to Everton on Wednesday night.

That game was the first on the new turf that has been laid at Elland Road, and it appears as though it could take some time to adapt to the new terrain underfoot.

After much was made of the shocking state of Leeds’ pitch following their last home against Brighton, a new pitch – acquired from Tottenham for £300,000 – was brought in and put down ahead of this clash with the Toffees.

But while the surface looked considerably better than its previous incarnation, there were still plenty of occasions where players would struggle to find their footing.

That certainly seemed to be the case more with Leeds – certainly in Bielsa’s mind – although it appears as though the Whites boss is never the less pleased to have that new carpet laid out for his side at Elland Road.

Speaking about the new pitch after the game, Bielsa was quoted by Leeds Live as saying: “I only saw my team slip, I didn’t see the opponent slip. We are very happy to be able to count on a pitch that is much better than the last few games.

“It’s impossible to make a reference as to why we slipped.”

There is not long until that pitch is set to be in use again, with Crystal Palace making the trip to Elland Road on Monday night.

The lack of grip on the pitch was certainly noticeable last night, and I do think Bielsa has a point with what he is saying here.

While I wouldn’t say there were no slips from Everton, there did seem to be more coming from those in white shirts during the course of the 90 minutes, and that will no doubt have been frustrating as they went in search of an equaliser.

However, you would imagine that the more they play on it, the more those Leeds players will become accustomed to the nature of the turf that is under their feet, and this ought to become less of a problem for them.

Indeed, you wonder if they could even use that to their advantage at some point, since they will be more familiar with the way the pitch is than those visiting sides who have never played on it