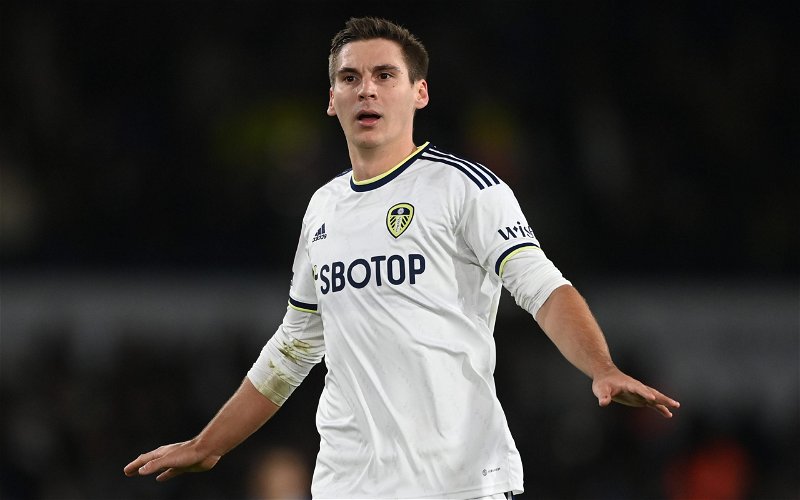 Max Wober already looks like being an excellent signing for Leeds United.

That’s according to Harry Redknapp, who was hugely impressed with what he saw from the defender in the Whites’ stalemate with Brentford on Sunday afternoon.

Joining from RB Salzburg earlier in the January window, it had looked as though Wober had been brought in to fill the void at left-back.

So far though, the 24-year-old has largely operated at centre back, where he has quickly proven himself to be a solid option.

Indeed, Wober formed an effective partnership with Robin Koch in the centre of defence in that goalless draw with Brentford at the weekend, where Leeds looked much more solid defensively.

Now it seems that on the back of that, Redknapp believes Leeds have pulled off some strong recruitment, with the signing of the Austrian.

Writing about Wober after naming him in his Team of the Week in his Bet Victor column, the former West Ham, Tottenham and Portsmouth manager said: “He’s just joined the club, but he’s already making an impact. I thought he was superb against Brentford.

“He was strong in the tackle and looked very composed on the ball. He looks like a very good bit of business for Leeds.”

It does feel hard to argue with Redknapp’s assessment here.

Ever since he arrived at Leeds, Wober has been a commanding presence on the pitch for Jesse Marsch’s side, both with his own performances, and the way he is directing other defensively.

As a result, the Elland Road club do already look much stronger with him in their backline, suggesting he may be a key player in their efforts to avoid relegation this season.

If they manage to do that, and Wober continues to perform as he has been doing, then Redknapp will undoubtedly have been proved right with these comments about the defender.