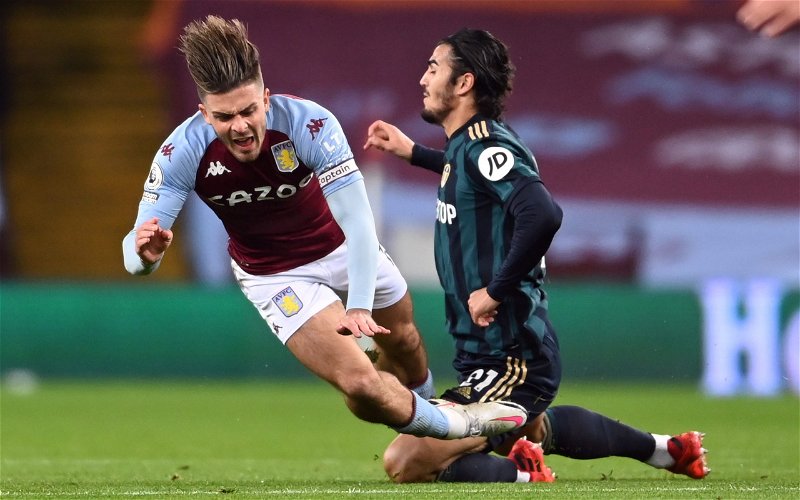 Leeds United’s Kalvin Phillips made a huge impact on England’s start to Euro 2020, and Aston Villa star Jack Grealish has opened up about his relationship with the Whites man.

Leeds and Aston Villa have shared a bit of animosity since Marcelo Bielsa took over at Elland Road, with every encounter with the Villans throwing up flashpoints.

From Mateusz Klich’s apparently controversial goal followed by Bielsa allowing Albert Adomah to score unchallenged in 2019, to Patrick Bamford’s hattrick at Villa Park, every game has been eventful.

Fans have shared their thoughts on each other this season as the two have impressed in the Premier League, with pundits like Gabby Agbonlahor also having a lot to say.

The discussion regarding Jack Grealish doesn’t sit well with Leeds fans, who know the attacking midfielder is an outstanding player, but has a tendency to add theatrics to his game, despite being clattered by defenders a ridiculous amount too.

He spoke on talkSPORT about his relationship with the Leeds fans, along with England teammate and friend Kalvin Phillips.

In good spirits, he stated:

I don’t know if you know, but I get absolutely caned by Leeds fans 24/7.

So I always say to him, ‘tell your fans to stop messaging me on Twitter, man!’

Me and Kalv always have a bit of banter about that.

Fans are starting to warm to the Villa sensation as his England form shines through, and fans were keen to weigh in on this insight…

I have to say, having seen more of Grealish this season and being able to make an accurate judgment, the ‘diver’ card isn’t the best.

On top of that, if anyone watched England’s friendly against Austria, they’ll know he gets booted up in the air more often than not.

This little snippet was good to see though because it shows he’s not taking it to heart and holding a grudge over it with Phillips, there’s clearly a mutual respect between the pair.