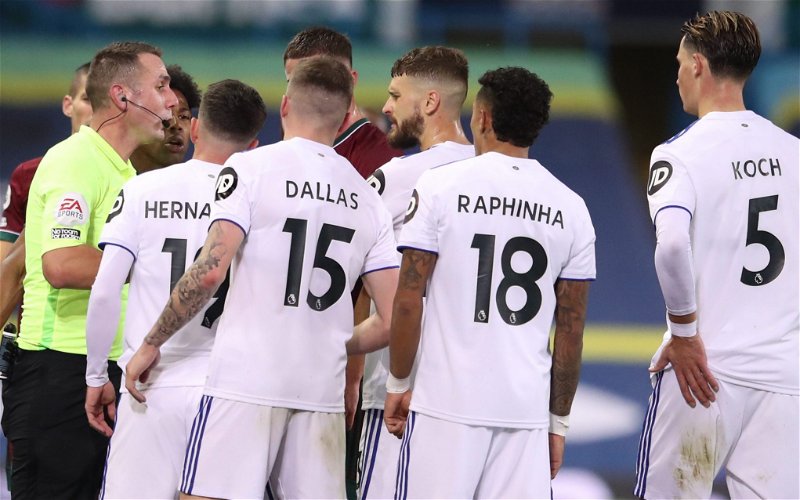 It was a frustrating night for Leeds United on Monday, as they suffered a 1-0 defeat at home to Wolves, courtesy of Raul Jiminez’ heavily deflected 70th minute strike.

While the result will no doubt be the most disappointing aspect of the game for those of a Leeds persuasion, there was also one key flashpoint late in the game, that left plenty of Whites fans far from impressed with the officiating, and VAR operation on show at Elland Road for the match.

As the game entered six minutes of second half stoppage, and with Leeds still chasing an equaliser, Whites defender Robin Koch went in for a challenge with Jiminez, which ended up with the Wolves man on the floor by the touchline, just inside the Leeds half.

As he went to ground, television footage appeared to show Jiminez kick out at Koch, something which sparked something of a reaction from both sets of players.

But despite the cameras picking up the reaction from Jiminez, neither the on-field referee, David Coote, nor the VAR team, led by Michael Oliver, elected to look into the move made by the Wolves man.

That is something that perhaps not surprisingly did not go down well with the Leeds United fanbase, with many critical of the officiating both on and off the pitch on Monday night, as they took to Twitter to react to Phil Hay’s update on that particular incident.

Twitter: Jimenez down after a challenge by Koch. Jimenez had a little kick at Koch after he went down. VAR doesn’t seem both… https://t.co/IpFceMZqGL (@PhilHay_)

Twitter: @PhilHay_ What’s the point in VAR if they’re not going to use it properly? (@jinjey_247)

Twitter: @PhilHay_ VAR haven’t been bothered since the penalty to Costa. (@Tombatty2)

Twitter: @PhilHay_ Didn’t think the referee could get any worse (@nickswatton)

Twitter: @PhilHay_ It’s simple we all can see through it – if the ref doesn’t give it his mate will never over rule him – if… https://t.co/jAaZv2FGnT (@MarkrReynard)

Twitter: @PhilHay_ Once again VAR making it up as it suits them. Ridiculous. (@theandytrotter)

You can certainly understand the frustrations of Leeds’ fans here.

There have been plenty of similar cases to Jiminez’ kick out here that have been deemed red cards, so it does seem as though this has once again highlighted the distinct lack of consistency there is in officiating right now.

That being said, given this was the same group of officials that officiated Saturday’s Merseyside derby, albeit with the roles reversed, it is perhaps no huge surprise to see this controversy.

Indeed, you feel that with the amount of attention there is on VAR at the minute, you have to feel as though the way it is used is something that needs to be looked into, so that the focus of football can shift back to events on the pitch, rather than decisions that are being made off it.