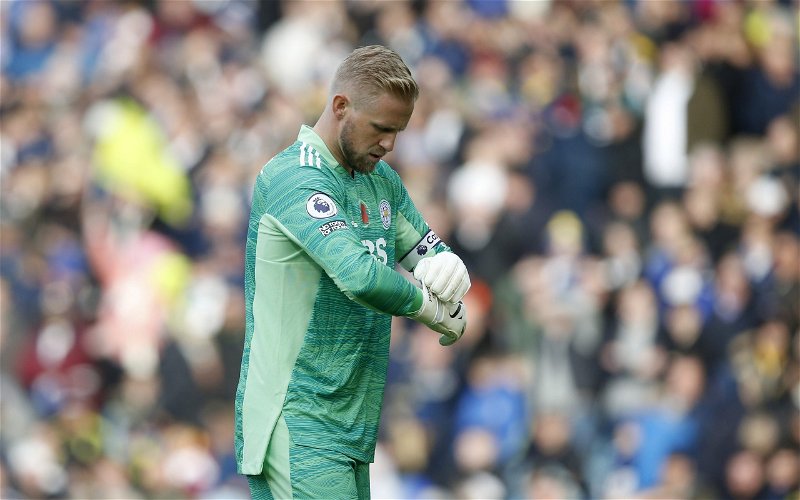 Leicester City goalkeeper Kasper Schmeichel has taken aim at the Leeds United fans for their less-than-amicable welcome for him.

Leeds’ period outside of the Premier League saw countless players brought in with little to show for their efforts at Elland Road.

Some promised a lot more than they showed, and Kasper Schmeichel’s career is proof that some players were just at the wrong club at the wrong time.

Son of Manchester United great Peter Schmeichel, Kasper arrived at Leeds under Simon Grayson but only lasted one season at Elland Road before joining Leicester City.

It’s safe to say that the Dane’s career has blossomed at the King Power Stadium, first winning promotion to the top flight before miraculously winning the Premier League, and most recently lifting the FA Cup.

However, he’s not been in for a great reception any time he’s faced his former club, including in the 1-1 draw earlier this season.

In the ITV documentary Against the Odds (quotes via Leeds Live), Schmeichel opened up about the issues he faced when it came to Leeds fans.

“Every time I meet Leeds fans, they all say the same thing – ‘we welcomed you’.

“They used to sing a song saying ‘your dad’s a [swear] but we like you’. That wasn’t particularly welcoming.

“I met a Leeds fan after leaving and he was a bit annoyed at me for saying that I didn’t feel welcome and he confronted me about it. I shook his hand and said ‘your dad’s a [swear], but I like you, how do you feel?’.

“He was obviously shocked, he said ‘well that’s just banter, that’s just terrace banter’. I said ‘okay, that’s fine, that’s banter to you but do you like me calling your father that?’ And he obviously said no.”

I can see why Schmeichel isn’t overly fond of his time at Leeds, and I don’t see that sort of emotion ever changing.

This coming out will only rile up Leeds fans more, as much as the Dane has a really good point to make here.

I just think that he was destined to be in for a tough time here and the move wasn’t a good one for him, as much as he was and still is a terrific goalkeeper.

Having relations to Manchester United are just never going to go down too well if your dad is one of the all-time greats.