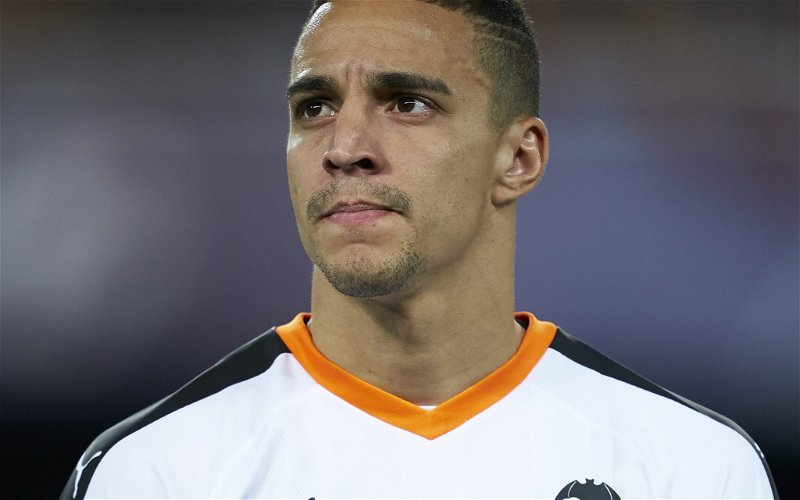 Patrick Bamford will start the season for Leeds United as the club figure out how to integrate striker Rodrigo Moreno into their squad following his move from Valencia, The Athletic’s Leeds United reporter Phil Hay has claimed.

Leeds are closing in on the signing of Rodrigo, as they look to add to their attacking options ahead of their return to the Premier League next month.

However, it seems as though logistical issues and international duty could mean Leeds are forced to wait to unleash their new weapon on the top-flight of English football for quite some time.

With Bamford currently the only centre forward on the books at Elland Road, a fresh source of goals was always going to be something Leeds were going to have to find in the transfer market this summer.

That is something the club look to have done with the addition of Rodrigo, after Valencia announced they had agreed a deal with Leeds for the sale of the striker on Tuesday night.

Subsequent reports have claimed that Rodrigo has now had his medical ahead of that move, but with the striker currently based in Spain, it could be some time before we get to see the striker in a Leeds shirt.

Current Government regulations state that people coming into Britain from Spain must quarantine for two weeks, and Hay has confirmed that that is something Leeds are having to look to navigate as they look to introduce Rodrigo into their squad.

Speaking about the issue of Rodrigo having to quarantine on The Phil Hay Show for The Athletic, Hay said: “It’s inevitable that Bamford will start the season.

“At the moment, Leeds are trying to work out how quarantining is going to be resolved with Rodrigo because, clearly, he’s in Spain and in theory, he should be quarantining for a couple of weeks.”

Rodrigo has also been named in Spain’s squad to face Germany and Ukraine next week, with the second of those games just a few days before Leeds begin their campaign away at defending Premier League champions Liverpool.

It seems that could also have an impact on how and when the 29-year-old starts work with his new side, with Hay adding:  “He’s due to go away for internationals next week as well.

“It would probably be a big challenge for Bielsa to get him ready for Anfield.”

Following that opening day meeting with Liverpool, Leeds will next be in action in the second round of the Carabao Cup the following midweek, before their first game at Elland Road takes place against fellow promotion winners Fulham on the weekend of the 19th September.

This ought to be frustrating for Leeds.

Having seemingly spent so much on Rodrigo, the club would surely have wanted to start getting a return on that investment as soon as possible.

However, they will have known these quarantine rules when they made their move for the striker, and with international signings made by other clubs having to quarantine before starting training, it is hard to see Leeds getting around this with Rodrigo.

That being said, Marcelo Bielsa is not exactly someone who rushes a new signing into a starting lineup, so there is a chance that we wouldn’t have been seeing Rodrigo at Anfield anyway.

But with the importance of the Carabao Cup tie a few days later not as great as that trip to Merseyside, you wonder if Leeds will be keen to get the striker through quarantine in time for that game, to give him the chance to get used to the setup of his new side in a less pressurised situation.