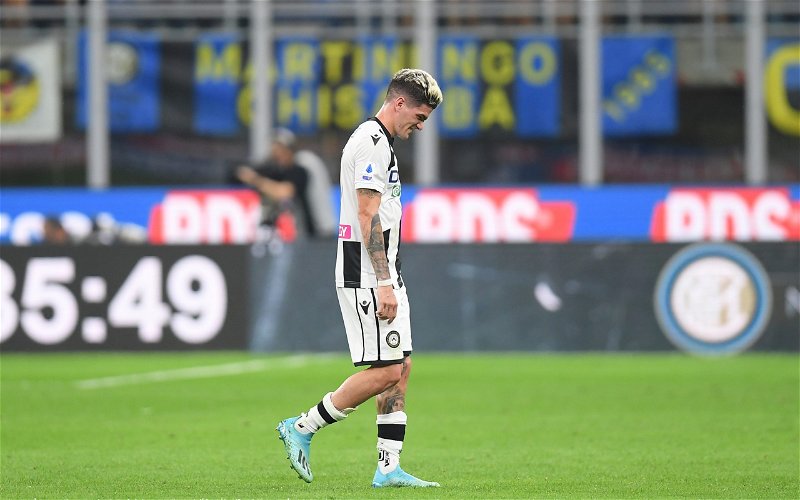 A move to sign Rodrigo De Paul from Udinese is looking less and less likely by the day for Leeds United, as multiple sources continue to play down the transfer.

The Whites had a busy summer window, bringing in four first-team players to enhance the squad in key areas of the pitch for the Premier League.

We’ve seen the tremendous impact of Rodrigo and Raphinha in attack, while Robin Koch has been a regular feature and Diego Llorente has struggled with injury thus far.

However, there were strong suggestions Leeds were looking to add a fifth signing back in the summer.

The name Rodrigo De Paul cropped up daily in the summer transfer window as the likes of Fabrizio Romano reported strong interest from Elland Road in the Argentine.

These strong links came with genuine admission from De Paul that he was keen to move, where his tweet (now deleted) stated his desire to move.

No such move was ever made for the attacking midfielder and it’s now one of the positions where you could argue Leeds might need to focus on in the coming months.

However, Phil Hay of the Athletic has reported that any move for the Udinese star is extremely unlikely, where he wrote: “There was, it should be said, a grain of truth in Leeds United’s move for Rodrigo De Paul.

“They asked the question, were informed of an asking price in excess of £30million and decided that valuation made any further effort pointless.

“That brief exchange took place in the last transfer window and there is constant bemusement at Elland Road over the strength of speculation still linking them with De Paul.

“It is not, as we say, that the Udinese midfielder was never on their radar. They just see a disparity between the coverage given to a potential transfer on which they spent very little time.”

With a move for the Argentina star seemingly not ever as close as perceived, Hay also had this to say: “Sources close to De Paul believe that the brief nature of Leeds’ initial dabble makes a future bid unlikely.

“Officials at Elland Road consistently talk down the prospect of them and Udinese doing a deal.”

It’s hardly a shock that a player commanding a fee in excess of £30million is one that we didn’t push hard for.

We simply cannot afford to make those sort of signings yet given that we’re only just in the Premier League this season.

He’d have been a perfect fit for Bielsa but that’s because he’s a top drawer player worthy of fitting into a lot of Champions League outfits.

I’d have loved to see him at Elland Road but that’s purely from an optimistic perspective, but when you see the finances that were involved, we’re better off searching elsewhere.