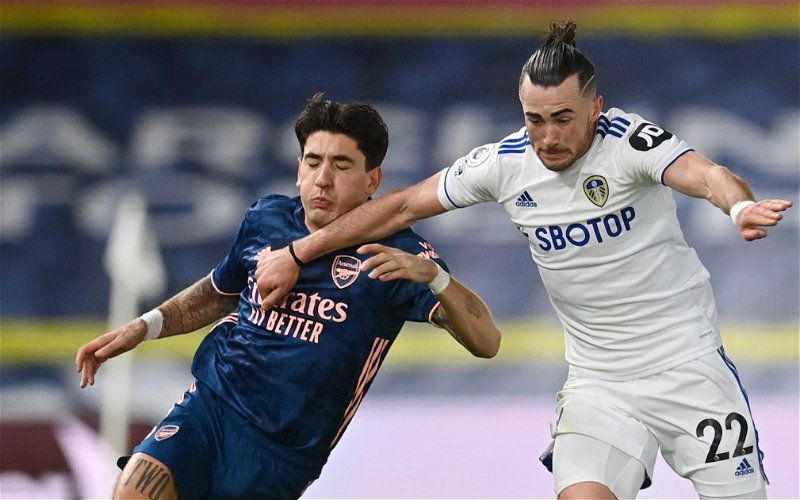 People at home might not realise how difficult Leeds United are to play against, thanks to the relentless nature of their efforts throughout a game.

That’s according to Arsenal full-back Hector Bellerin, who has been reflecting on going up against Leeds at Elland Road on Sunday night.

It was something of a frustrating night for Leeds against the Gunners on Sunday.

Despite largely dominating proceedings, and playing the second half against ten men following the sending off of Nicolas Pepe, Marcelo Bielsa’s side were unable to find a breakthrough, and were ultimately forced to settle for a goalless draw.

But while they may not have taken all three points from the game, it seems they still left quite an impression on Bellerin, who played on the right of Arsenal’s defence against the Whites, completing the full 90 minutes, where he clearly feels he had his work cut out.

Speaking after the game about his thoughts on Leeds after the game, Bellerin was quoted by LUFCDATA on Twitter as saying: “I don’t know if people at home realise how difficult it is to play against a team like this.

“They literally don’t rest in the whole game and for us it is a challenge. They’ve been working really hard. They know how they want to play.”

Twitter: Héctor Bellerín on Leeds: “I don’t know if people at home realise how difficult it is to play against a team like t… https://t.co/ZH33H2vL6v (@LUFCDATA)

This does seem good to hear from a Leeds perspective.

There have inevitably been questions about whether they can continue to play at the intensity they do this season, particularly given their results immediately before the international break.

However, judging by Bellerin’s comments here, it seems they have no problems doing that at the minute at least, which should be a huge source of encouragement going forward.

Indeed, with Rodrigo still to return from injury, you feel they will still only get stronger going forward, so a return to winning ways feels like it might not be all that far away for Bielsa’s men.