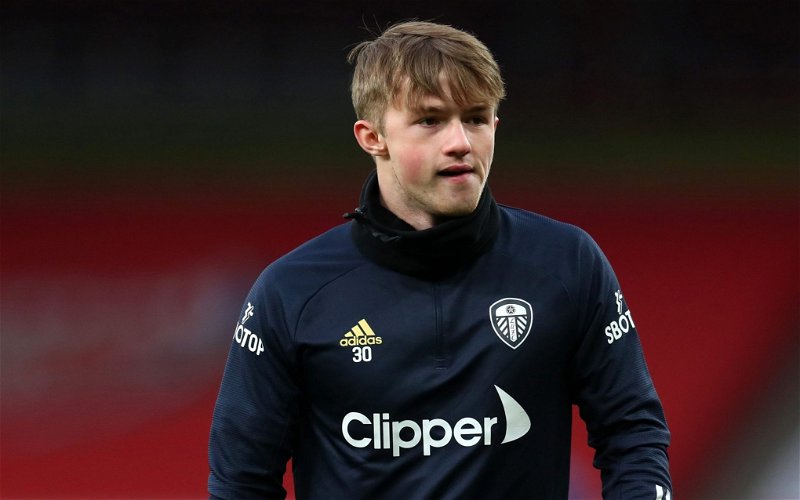 Leeds United were without Joe Gelhardt for the weekend’s game with Manchester United, and Adam Pope has shed some light on hi strange absence from the side.

Leeds have been able to call upon a number of youngsters ever since Marcelo Bielsa took charge of the club.

A lot of players have come through and made their debuts, with some managing to push for a starting berth in the past year, including Pascal Struijk.

Others have been used to plug gaps in what is a fairly thin first-team squad.

Joe Gelhardt’s inclusion in the Premier League squad this season has been impressive at his age, but hardly a shock as he continues to rip up the PL2.

He’s yet to make his debut but it shows how highly he is rated to be regularly making his way onto the bench as Leeds fight for a top-half finish.

The 0-0 draw against Man United saw Gelhardt mysteriously miss out from the squad, as Sam Greenwood took his place.

With the under-23s then playing on Monday, it was revealed that Gelhardt missed out then too.

BBC journalist Adam Pope has now shed some light on why the England youth international has been absent the past two days:

Hopefully, it’s not anything major with Gelhardt.

Of all the youngsters knocking on the door, he’s the one you can see getting a league debut before the end of the season.

An injury setback might put a stop to that if he’s out for a decent period, with his fitness then needing some work before he’s up to speed.

Greenwood will surely now be seeing this as a chance to get ahead of his teammate in the attacking pecking order.