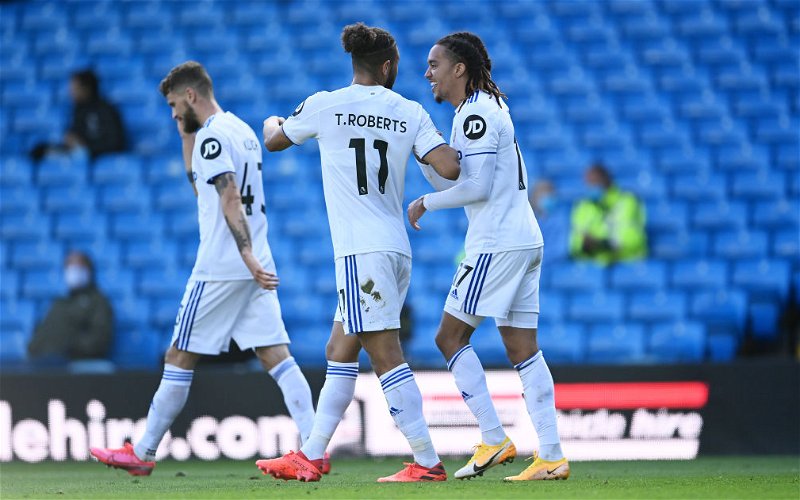 Leeds United’s Tyler Roberts is unlikely to move on from Elland Road this summer, according to the BBC’s Adam Pope.

Ever since Leeds lifted the Championship title, there’s been a focus on enhancing the attacking prospects of the side.

That has come at a cost for 21-year-old Tyler Roberts who has drifted out of the side in favour of record-signing Rodrigo.

With the January window underway, speculation around the Welsh international persists.

Roberts was left out of the squad for Leeds’ trip to Tottenham Hotspur at the weekend, with his future cast into further doubt.

When asked about why Roberts was absent, Marcelo Bielsa simply stated he was ‘unavailable’.

A cryptic answer that neither confirms nor denies any transfer interest in him, likewise with an injury or fitness issue.

However, Adam Pope has attempted to shed some light on the situation, claiming Roberts could have been left out as part of protocol.

Speaking on BBC’s West Yorkshire Sport Daily, Pope claimed: “We don’t know why Tyler Roberts was left out at the weekend.

“We know there have been instances [of COVID-19] at Leeds with Rodrigo, who had to isolate, so is he injured? It doesn’t look like he’s going out on loan at this stage.

It’s hard to gauge what the issue with Roberts was for the weekend but Pope’s claim stands to reason with the latest test results from the Premier League revealing a season-high 40 positive results.

It’s a strong idea that makes sense based on how the club has been keeping such issues under wraps recently.

It’s also hard to guess what the issue is with Roberts but with Crawley up next, if he’s fit and available, I’d be shocked if he didn’t feature.

There’s no doubting he’s a talented player but injuries have stopped him from building any momentum under Bielsa.

I’m of the persuasion that a loan move would be beneficial for him at this stage in his career, but heb you’re toying with Bielsa’s very delicate squad depth.