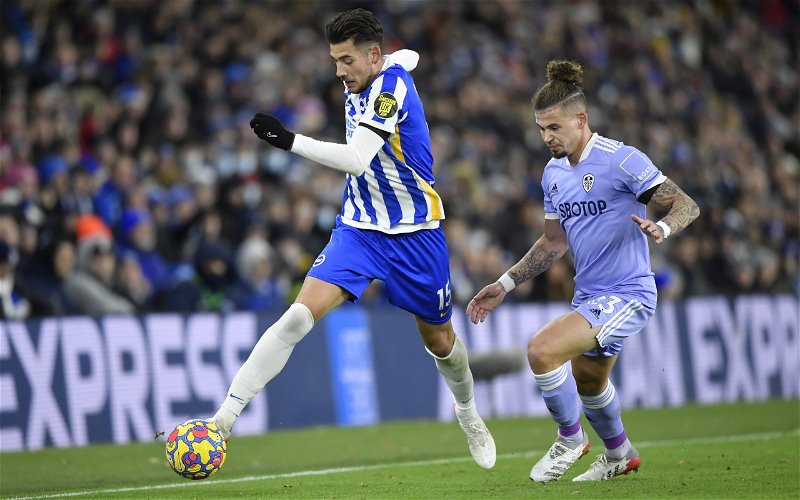 Kalvin Phillips was not injured despite Marcelo Bielsa substituting him at half-time last night as Leeds United drew 0-0 with Brighton and Hove Albion.

Leeds were below-par on the South Coast, struggling through the first-half and only improving slightly after the break.

Bielsa was clearly unimpressed with the first-half, too, bringing on Jamie Shackleton for Junior Firpo and Pascal Struijk for Phillips at half-time.

Instantly, you worried about an injury to Phillips, yet that doesn’t seem to have been the case.

As per Adam Pope, Bielsa has confirmed that Phillips wasn’t injured, suggesting that the decision to replace the 25-year-old was tactical.

Phillips started the game at centre-back, before moving up into midfield as Leeds looked to wrestle control after a strong Brighton start. It was a tactic used the week prior in the defeat to Tottenham.

Leeds improved with Struijk at the base of midfield, with Robert Sanchez denying Tyler Roberts on three occasions late on.

This is interesting, as however bad Leeds are, it’s not often you see Bielsa sacrificing Phillips to make them better.

It happened a couple of times in 2018 when Bielsa had first arrived but we’ve not seen that tactic yet in the Premier League.

Despite the shock of the decision, it did actually work. Struijk did well when he came on, getting Leeds moving up the pitch and creating a few more openings.

However, it isn’t a long-term tactic and as a crucial clash with Crystal Palace looms, Phillips will have to come back in. Leeds are a better side with him in the midfield.