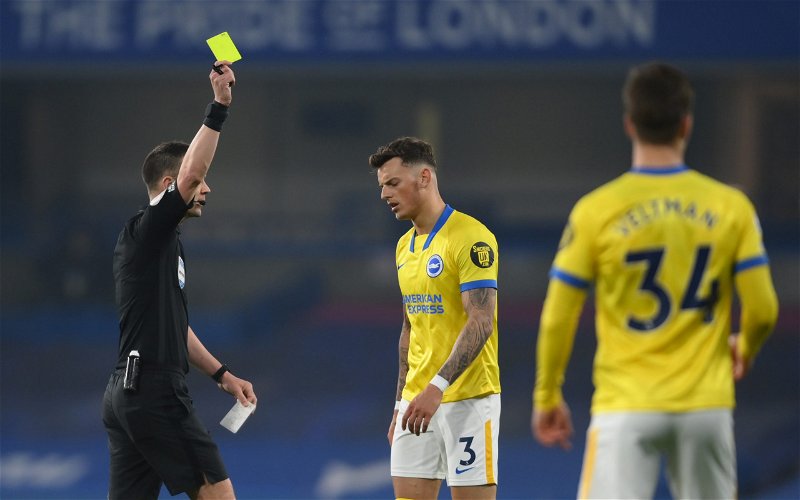 Leeds United make the trip south to Brighton this weekend, and another reunion with Ben White is on the cards.

The 2019/20 promotion-winning squad will never be forgotten by Leeds fans, including star loanee Ben White.

The Brighton centre-back came as a relatively unknown defender, but became arguably the best centre-back the club’s had outside of the Premier League.

With such performance, it wasn’t a shock to see the Seagulls keep hold of White for this season.

Leeds have moved on from White, but there’s a lot of good feelings between the club and player still.

His first reunion with Leeds went well for him, helping the side to a 1-0 win at Elland Road.

However, a clash against Chelsea two games ago saw White sent off for a second bookable offence, seeing him miss the defeat to Sheffield United.

With his one-match ban complete, he’s set to return to the side this Saturday.

Adam Pope delivered this update on the former Leeds favourite:

White has been deployed as central midfielder often this season, but unsurprisingly, he’s still been a great performer for Graham Potter.

It’s good to see that White will be back to play us.

Hopefully we can give a far better account for ourselves in this clash than we did in January.

We were far from our best in that game and Brighton deserved the win, but we’ve turned a huge corner since then.

With hindsight, it’s funny to see how we were deemed their relegation rivals in the White transfer saga.

We can keep them looking over their shoulders by beating them, but you’d expect they have too much to go down.