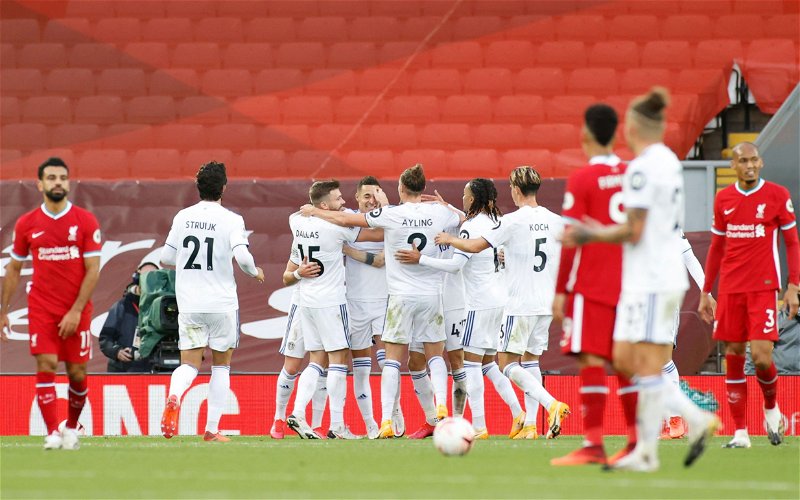 Gary Neville has described Leeds United’s Anfield performance as a ‘thing of beauty’ and praised how uncomfortable they made Liverpool look.

Leeds were beaten 4-3 at Anfield on Saturday, with Mo Salah’s hat-trick the difference. However, Marcelo Bielsa’s side came from behind on three occasions and gave a great account of themselves on their Premier League return.

Pundits have been piling the praise on Leeds and, now, Sky Sports’ Gary Neville has had his say.

On the back of the weekend’s action, Neville and Jamie Carragher were both appearing on Sky’s Monday Night Football (14/09, 17:00).

Carragher was co-commentating the fixture at Anfield, but Neville got stuck into his analysis of Bielsa’s side.

I think they will do really well, they will scare the living daylights out of some teams.

They will take a lot of teams – as they did Liverpool’s defenders – to a really uncomfortable place.

I don’t think that group of players (Leeds) could have been managed by anybody else and gained that outcome that they did on Saturday.

They took Liverpool to the point of conceding three goals. Van Dijk was unnerved, Alexander-Arnold was unnerved; these are some of the best defenders in the world.

I thought it was a thing of beauty to watch, I really did.

The performance at Anfield was something to be really proud of.

We managed to make Liverpool look a wreck at the back, which not many sides can say they’ve managed to do in the last two season.

Of course, there were four goals conceded, which is a concern, but we will work on that and when Liam Cooper returns, we will look stronger.

Right now, it’s nice to hear the high praise heading our way, even if it is from Manchester United legend Neville.

Let’s hope on Saturday we get some points to complement that positive start.