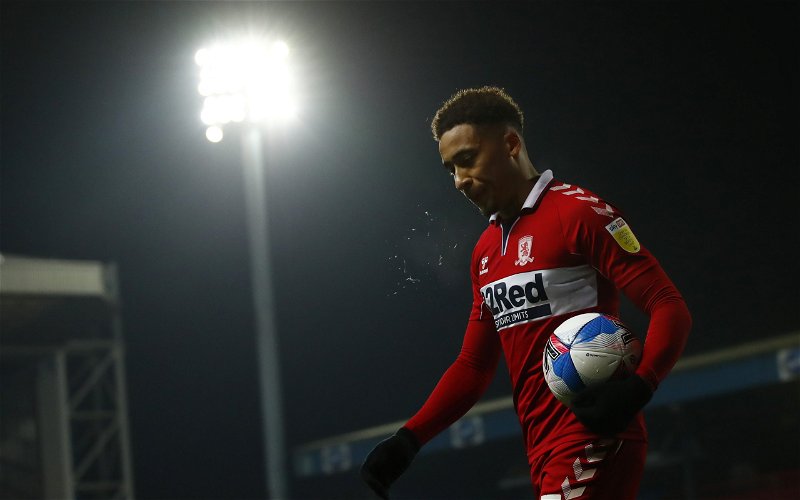 Leeds United are reportedly tracking Middlesbrough midfielder Marcus Tavernier as Victor Orta looks to exercise his past connections with the club.

An attacking midfield signing looks like it could do a lot of good for Marcelo Bielsa and Leeds in the January window due to what the club is currently lacking.

The area on the pitch in front of Kalvin Phillips is without any real cover for the Whites and they have been linked with a handful of names already.

TEAMtalk are reporting that Middlesbrough man Marcus Tavernier is being monitored by Leeds and Victor Orta ahead of the new year.

As we speculate the possibility of Leeds signing Tavernier, we take a look at three qualities we believe he would bring to the club…

One thing that stands out with Tavernier is his ability to create regular chances for his side.

He’s predominantly played in central midfield for Boro under Neil Warnock, and in the process this season, he has managed to average 1.7 key passes a game.

That’s a figure that puts him fifth when compared to our promotion-winning side, and only Raphinha (2.1 per game) has a better average this term.

One thing that we have lacked from our midfield this season is the ability to create chances through the middle, and having that extra output from Tavernier would be a great boost.

Despite being left-footed, Tavernier has operated often this season as a right-wing-back in the Championship.

He wouldn’t be the first player to be playing on the opposite wing to his dominant foot, but it shows how comfortable he is not only to play through the middle but also to play on a less-desirable side for a left-footed player.

Being able to underlap and invert as a wing-back would be a huge asset to have under Bielsa and being a left-footer helps massively, just as Stuart Dallas demonstrates on the other side with his right foot.

It’s a quality to play off that side that we see plenty at Leeds and players who can do that fit right in.

Having the option to play in multiple positions brings us nicely to Dallas too, because we would have another player to call upon in the squad that can do what Dallas does.

In the Northern Irishman, we have a player that covers a host of slots in the squad, and Tavernier would essentially be halving his workload by arriving.

If Warnock is happy to deploy you in a more defensive role than you’re used to, you’re doing something right without the ball.

Making 2.2 tackles per game shows he’s more than competent when it comes to his one-on-one tasks each week, another box ticked when you’re looking at a Bielsa side.

That ability can serve him well wherever he would be playing in our team because those individual battles are seen all over the pitch for Leeds.

He’s someone whose attacking qualities usurp what we need to see from him defensively, but it’s a massive bonus to know that we could call upon him to do his bit going back too.

Similar formations are likely to be implemented by new Boro gaffer Chris Wilder with the same demands as well, so we’ll have to see how he does under the new boss.