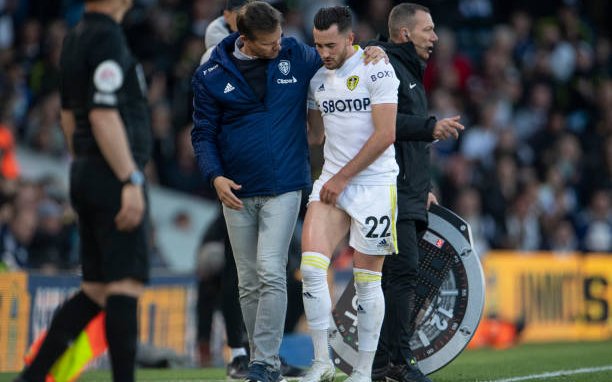 Leeds United suffered another damaging blow in their battle to avoid relegation from the Premier League on Wednesday, as they were beaten 3-0 by Chelsea at Elland Road.

After Mason Mount put the visitors ahead inside five minutes with a brilliant finish from the edge of the area, Leeds task got even harder when Dan James was shown a straight red card midway through the first half, for a reckless challenge on Mateo Kovacic.

That helped Chelsea to put the seal on the win after half time, courtesy of goals from Christian Pulisic and Romelu Lukaku.

As a result, Leeds remain 18th in the table, level on points with Burnley in 17th and two behind Everton in 16th, with both those sides having one more game to play than Jesse Marsch’s side.

There will therefore, be plenty to think about for Marsch after this game, and here, we’ve taken a look at two new concerns the Leeds manager will have around his side, following last night’s defeat.

Just as it did with Luke Ayling at Arsenal on Saturday, a lack of discipline took its toll on Leeds on Wednesday, with Dan James sent off for his challenge on Kovacic.

Like Ayling, James could have little complaint about his sending off, and not only did that once again leave Leeds at a disadvantage in terms of being a man down in that game, those suspensions further narrow Marsch’s selection options, at a time when injuries are doing that enough anyway.

As a result, there is now a challenge on for Marsch to make sure his players find the right balance between passion for the cause and the plain foolishness shown by Ayling and James, as any more moves like that in the remaining two games, could cost Leeds the win they need to make it to safety.

As if James’ sending off didn’t prove damaging enough for Leeds in attack, there are also concerns around Raphinha and Jack Harrison as well.

The latter two were both forced off with injuries on Wednesday night, with Harrison a particular concern as Leeds wait for a scan to discover the extent of the problem that he picked up.

With Patrick Bamford still seemingly touch and go over a potential return to action after his latest lay-off, you feel that Marsch is getting dangerously close to running out of forward options he can turn to, in the hope of getting the goals his side need to stay in the Premier League.